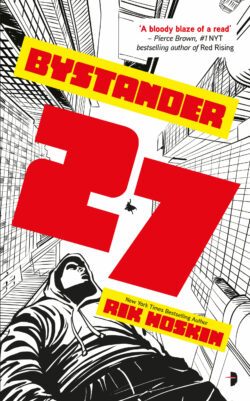 by: Rik Hoskin
Buy the ebook version now – only £4.99 – £9.99
After his pregnant wife is senselessly killed in a clash between the mysterious super-powered ‘costumes’, ex-Navy SEAL Jon Hayes fights to discover the truth about their identity and origins.

For Jon Hayes, the super-powered ‘costumes’ are just part of ordinary life in New York City, until the day his pregnant wife Melanie is senselessly killed in a clash between Captain Light and The Jade Shade. But as Hayes struggles to come to terms with his loss, and questions for the first time who the costumes are and where they come from, the once sharp lines of his reality begin to blur… If Hayes wants to uncover the shocking truth about the figures behind the costumes, and get justice for his fallen family, he’ll have to step out of the background, and stop being a bystander.

“Irreverent, gritty, and poignant when it needs to be, Bystander 27 is a bloody blaze of a read that peels back the familiar trappings of a super-hero tale to explore loss, revenge, and the power imbalance when cape-wearing gods walk the Earth astride us mere mortals.”
– Pierce Brown, author of Red Rising

“Rik Hoskin’s Bystander 27 is a novel equal parts mystery and action that will appeal to fans of comic books and graphic novels.”
– Brandon Sanderson, author of Mistborn and The Stormlight Archive

“An epic and furious adventure!”
– Alan Philipson, contributing author to the Deathlands series

“Bystander 27 is a twisty page-turner that freaked me out and kept me guessing. Rik Hoskin, you are SuperScribe! Bring on the sequel!”
– Nancy Holder, New York Times bestselling author of The Wicked Saga

“Wow! What a ride! Twisty, sneaky awesome book of superheroness with a dash of humor, mystery and thriller and completely different than anything you’ve ever read. Fun stuff! For comic book fans, for Marvel fans, for Dr. Horrible Sing Along Blog fans.”
– Patricia Briggs, #1 New York Times bestselling author of the Mercy Thompson novels

Rik Hoskin is an award winning writer of novels, comic books, animation, video games and audio plays. He won the Dragon Award for Best Graphic Novel for “White Sand” in collaboration with Brandon Sanderson, and has also written comic books for Star Wars, Superman, Doctor Who and many others. He has written almost 30 books, the majority under the pen name James Axler, and has been head writer for a video game. He has written animated stories for BBC Television in the UK.