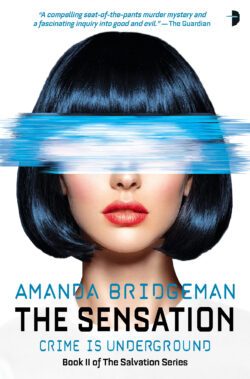 Last time she investigated the saints of the Solme Complex. This time it’s the sinners of the Sensation… Presenting the second Salvi Brentt novel from award-winning author, Amanda Bridgeman

File Under: Science Fiction [ Electrical High | Rich vs All | Deathly Addiction | If You Go Down to the Woods… ]

A series of brutal murders has the homicide division of San Francisco’s Hub 9 working overtime. But as the bodies mount, they begin to question whether the attacks are random or somehow connected. When one of their own falls victim, Detective Salvi Brentt and the Hub 9 homicide team join forces with the narcotics and cyber divisions to track down those responsible. They soon discover a volatile new drug-tech experience, involving black market neural implants, has hit the streets, causing the epidemic of violence and missing persons. With the clock ticking and the bodies piling up, Salvi must go deep undercover in the seedy Sensation club scene to found out who is behind it. But in the secretive playgrounds of the rich and powerful, some will stop at nothing to protect their empire. Searching for a faceless killer, Salvi digs herself in ever deeper to get closer to the truth. But the more secrets she uncovers, the more she begins to question whether she will make it out alive, or whether she will be buried within…

AMANDA BRIDGEMAN is a Tin Duck Award winner, an Aurealis and Ditmar Awards finalist and author of several science fiction novels, including the best-selling space opera/military SF Aurora series, alien contact drama The Time of the Stripes, and sci-fi crime thriller The Subjugate. Born in the seaside town of Geraldton, Western Australia, she moved to Perth to study film & television/creative writing at Murdoch University, earning her a BA in Communication Studies. Perth has been her home ever since.