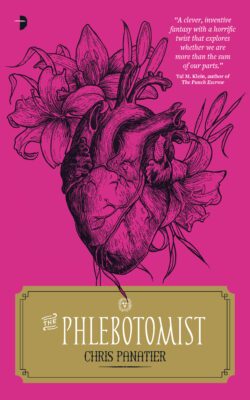 In a near future where all citizens are subject to the mandatory blood draw, government phlebotomist Willa Wallace uncovers the truth about where the blood really goes.

File Under: Science Fiction [ Blood Will Out | This Might Hurt a Bit | Be positive | Bloody Nightmare ]

War brought the Harvest. Willa Wallace is a reaper. To support herself and her grandson Edwin, Willa works for the blood contractor Patriot. Instituted to support the war effort, the mandatory draw—The Harvest—has led to a society segregated by blood type. Hoping to put an end to it all, Willa draws on her decades-old phlebotomy training to resurrect an obsolete collection technique, but instead uncovers an awful truth. Patriot will do anything to protect its secret. On the run and with nowhere else to turn, Willa seeks an alliance with Lock, a notorious blood-hacker who cheats the Harvest to support the children orphaned by Patriot. But they soon find themselves in the grasp of a new type of evil.

Chris Panatier is the author of Stringers and The Phlebotomist. He lives in Dallas, Texas, with his wife, daughter, and a fluctuating herd of animals resembling dogs (one is almost certainly a goat). He writes short stories and novels, “plays” the drums, and draws album covers for metal bands. Find Chris Panatier online: Twitter @chrisjpanatier. Website chrispanatier.com Instagram @chrispanatier