Enslaved by a mute-race of cruel dictators, Razvan learns their touch-language and works as a translator in order to survive. But war is on the horizon and his quiet life is about to get noisy…

Linguistic subterfuge in a city under siege! When he was a boy, Razvan trained as a translator for the hated Keda, the mute enslavers of his city, Val Kedić. They are a cruel race who are quick to anger. They keep a tight hold on the citizens of Val Kedić by forcing their children to be sent to work in the dangerous mines of the city from the age of eleven until they turn eighteen. By learning fingerspeak – the Keda’s touch language – Razvan was able to avoid such a punishment for himself and live a life outside the harsh climate of the slums. Now a man, Razvan has etched out a quiet life for himself as an interpreter for the Keda court. He does not enjoy his work, but keeps his head down to protect his son, held hostage in the Keda’s mines. The Keda reward any parental misdemeanors with extra lashings for their children. But now the city is under siege by a new army – the Dagmari – perhaps even more cruel than their current enslavers. At the same time, a mysterious rebellion force has reached out to Razvan with a plan to utilize the incoming attack to defeat the Keda once and for all. Razvan must decide which side to fight on, who can be trusted, and what truly deserves to be saved. 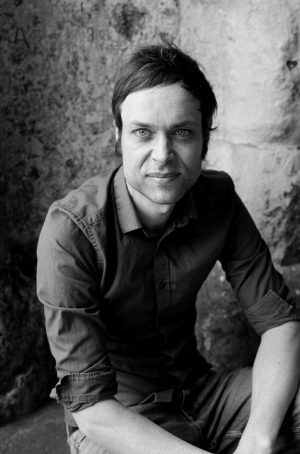 Alex Thomson is the author of Death of a Clone, published in 2018. He lives in Letchworth Garden City – home of the UK’s first roundabout – and his day job is a French and Spanish teacher in Luton

“Alex Thomson skillfully juggles compelling characters and impressively detailed mythology…the worldbuilding is impeccably handled… a terrific tale of someone caught between a rock and a hard place who doggedly refuses to be crushed – 4 stars.”
– SFX Magazine

“Thomson tells the story of a quiet man driven to take a stand in a medieval city teetering on the brink of war in this fast-paced epic fantasy.… Thomson builds a fascinating world of competing forces and political motivations.… Action-adventure fans will enjoy this brisk story of revolution, revenge, and justice – and look forward to the sequel hinted at the end.”
– Publishers Weekly

“Thomson has set up a difficult and heartbreaking situation, and watching the characters attempt to change it and find justice is key to the story’s appeal; readers will get lost in the action of the book.”
– Booklist

“Spidertouch presents a grim, intensely realized snapshot of life as a conquered people when your colonial overlords communicate by touch. It’s a densely conceived, detailed world full of politics and difficult choices and keeps you glued to the pages as a city struggles with the cost of freedom in a time of war.”
– Wayne Santos, author of The Chimera Code