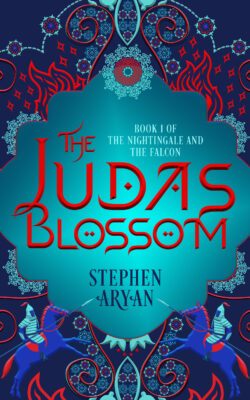 A brand new reimagining of the Mongol Empire’s invasion of Persia, following the lives and treacherous journeys of four key figures in the heart of war.

Book I of The Nightingale and the Falcon

Due to the efforts of the great Genghis Khan, the Mongol Empire covers a vast portion of the known world. In the shadow of his grandfather, Hulagu Khan, ruler of the Ilkhanate, is determined to create a single empire that covers the entire world. His method? Violence. His youngest son, Temujin Khan, struggles to find his place in his father’s bloody rule. After another failure, Temujin is given one last chance to prove himself to Hulagu, who is sure there is a great warrior buried deep inside. But there’s something else rippling under the surface… something far more powerful and dangerous than they could ever imagine… Reduced to the position of one of Hulagu’s many wives, the famed Blue Princess Kokochin is the last of her tribe. Alone and forgotten in a foreign land, Kokochin is unwilling to spend her days seeking out trivial pursuits. Seeking purpose, she finds herself wandering down a path that grants her more power than a wife of the Khan may be allowed. Kaivon, the Persian rebel who despises the Mongols for the massacre of his people, thirsts for revenge. However, he knows alone he cannot destroy the empire. When given the opportunity to train under the tutelage of Hulagu, Kaivon must put aside his feelings and risk his life for a chance to destroy the empire that aims to conquer the world. Family and war collide in this thrilling and bloody reimagining of the Mongol Empire’s invasion of Persia.

Be the first to review “The Judas Blossom” Cancel reply