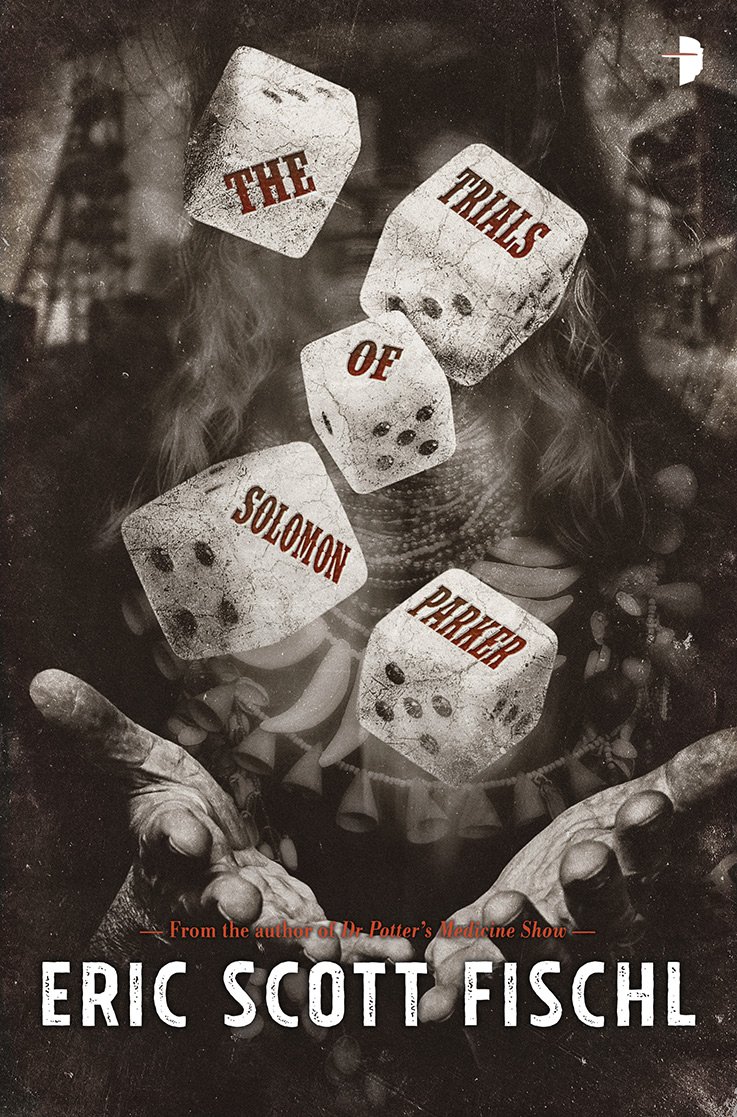 The Trials of Solomon Parker

An old man with a history of bad decisions makes one bad gamble too many and finds himself the plaything of bored gods and their servant, Marked Face…

File Under: Fantasy [ Under the Headstocks | Meet Marked Face | Roll the Bones | Put Your Hands Up ]

1916, Butte, Montana: City of the Copper Kings. Solomon Parker is old, broken, and deep in debt to some very bad people. He’s always managed to stay one step ahead of his last bad decision, but more than anything, he wishes life had turned out differently. Little does he know that for him and his young protégé, Billy Morgan, that wish is about to come true. The Above Ones, the gods of the People, are bored. Their servant, Marked Face is coming, and he’s bringing his dice… https://youtu.be/eFRfbnYNQFw

“Prepare to be challenged, prepare to follow an unusual narrative structure to an unusual and uncertain conclusion. This is brilliantly written by an author who really knows what they’re doing. Well worth a read.”
– British Fantasy Society

“There is a lot going on in this novel, but it never feels overstuffed: fascinating history lessons, Native mythological archetypes, compelling and broken characters, and damn good storytelling elevates The Trials of Solomon Parker to whole new level of weird western. Two excellent books in a calendar year – Fischl is definitely a writer to watch.”
– Barnes & Noble Sci-Fi & Fantasy Blog

“The Trials of Solomon Parker is a darkly philosophical novel, one that feels very honest for all its lack of hope.”
– A Bookish Type

“The Trials of Solomon Parker by Eric Scott Fischl is a ’What would happen if you could go back and fix your mistakes?’ book which succeeds when it breaks away from the expected pattern for such a book. Which it does. A lot. It succeeds a lot.”
– Anthony Eichenlaub

“With The Trials of Solomon Parker Fischl firmly cements himself as the premier writer of the Gothic Western, equal parts Lovecraft and Cooper.”
– Writers, Artists and Readers Guild

“In case you can’t tell, I really liked this book… I highly recommend The Trials of Solomon Parker. 4 hoots!”
– Purple Owl Reviews

“If this is truly only Fischl’s second novel (and even if it isn’t) he’s really going to be someone to watch. I’m not sure how he’s ever going to top this one, but I’m pretty sure he’s going to try. And I, for one, can’t wait until he does. I’m a Fischl fangurl now, for sure.”
– Skiffy and Fanty Podcast

“The Trials of Solomon Parker is a difficult book to categorize as it’s a rather unique blend of mythology, western, drama, and thriller. However, it does each insanely well. The mythology is grounded without being specific. The characters are incredibly drawn, even the minor ones. The dialogue is snappy and realistic. Solomon’s trials and tribulations drive the story, obviously, but smaller characters like the Irish thug-turned-kingpin nearly steal the show. All of the elements lend the story a surreal realism that’s at odds with the supernatural aspects.” Five/Five Stars
– Manhattan Book Review

“The Trials of Solomon Parker is a darkly philosophical novel, one that feels very honest for all its lack of hope.”
– A Bookish Type

“An impressive book: the world is richly imagined, and the characters are vividly drawn. The mysteries are teased out at just the right pace, and I couldn’t put it down. If this show rolls around again, I’ll be first in line for a ticket.”
– Barnes & Noble Sci-Fi & Fantasy Blog

“Dr. Potter’s Medicine Show is a brilliant study of characters struggling against the monstrous to retain their own humanity. Fischl’s talent for voice and knack for characterization finds humor and beauty amidst horror and depravity. It’s heartbreaking, elegiac, and an absolute pleasure to read.”
– Carrie Patel, author of the Recoletta series

“A word of advice: whatever you do, don’t drink the Sagwa. One part history, two parts fantasy, and three parts toe-curling horror. Drink it down. A grotesque elixir of history, fantasy, and toe-curling horror. Warning: may cause nausea, sleep disturbances, and compulsive page-turning. Not to be taken orally.”
– Arianne “Tex” Thompson, author of the Children of the Drought trilogy

“So even though Dr Potter rightly belongs on the ‘horror/occult’ side of the Weird Western spectrum, it cleaves apart from the sensational grimdark vogue that so heavily tints our view of the past. Fischl’s command of his characters’ world is grotesque, vivid, joyful, and sublime – an uncommon realism that honors the human side of history, and a reminder that a carnival of horrors is still a carnival, after all, with miracles and spectacles awaiting anyone brave enough to venture into the sideshow tent.”
– Tor.com

“The characters are vividly realised, leading you to feel as sympathetically towards some as you are horrified by others, and Eric Scott Fischl isn’t afraid to be brutal with his creations. The ingredients may seem pulpy, but Fischl has turned them into gold.”
– SFX magazine

“Dr Potter’s Medicine Show is violent, gory, and uncomfortable but ultimately a hell of a read.”
– Manhattan Book Review

“The old west is so well evoked you can almost smell the manure, the characters are incredible, leaping off the page and into your brain and the story carries you along in this miraculous world. Thrilling, entertaining and totally immersive.”
– Morpheus Tales

“The darkness and violence fits the overall tenor and style of the novel. It rattles along as a satisfying thriller, building to a climactic and horrific close.”
– Astounding Yarns

“How to describe the book? It’s almost as if Mary Shelley had set Frankenstein, or Robert Louis Stephenson Doctor Jekyll, in the Old West. But weirder than that, and funnier too. 4/5*”
– Blue Book Balloon

“The kind of story you should read while chugging cheap whiskey straight from the bottle and cussing up a storm. It’s an intense ride full of alchemy, death, and violence.”
– The Eichenblog