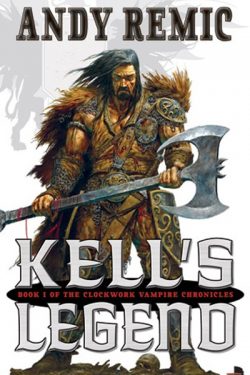 They came from the north, and the city fell. Kell’s axe howls out for blood.

“The only problem you will have is waiting for the next book in the series. I already have my calendar marked.” 4.5 / 5
– James Atlantic

They came from the north, and the city fell. It is a time for warriors, a time for heroes. Kell’s axe howls out for blood. Ferocious fantasy from a real-life hardman come to claim the post-Gemmell world. The land of Falanor is invaded by an albino army, the Army of Iron. A small group set off to warn the king: Kell, ancient hero; his granddaughter, Nienna and her friend, Katrina; and the ex-Sword Champion of King Leanoric, Saark, disgraced after his affair with the Queen. Fighting their way south, betrayal follows battle follows deviation, and they are attacked from all quarters by deadly albino soldiers, monstrous harvesters who drain blood from their victims to feed their masters, and the twisted offspring of deviant vachine, the cankers. As Falanor comes under heavy attack and crushing invasion, only then does Nienna learn the truth about grandfather Kell – that he is anything but a noble hero, anything but a Legend.

“I dived straight in, emerging a couple of days later – with a grin on my face… an engaging, fast paced cocktail of violence and intrigue that grabs you right from the outset and doesn’t let go until you run out of pages.”
– My Favourite Books

“Kell’s Legend is loosely based on the traditional fantasy story, brave but world weary warrior type who just wants to retire from any bloodshed and finds himself forced to use his talents of destruction. This tradition though is then bashed on the head and buried 6 feet deep with inclusion of the clockwork vampires creating a blend of fantasy horror and fantastic fight scenes. I mean really top quality fight scenes. One of Gemmell’s most redeeming qualities as an author was his ability to write about fighting and war to such a degree that you almost felt like rushing through his novels to get to those bits. Kell’s Legend fight scenes live up to this quality and elevate the novel way above the standard fare. Kell’s Legend is a novel of power and scope, able to stand as a worthy successor to the Gemmell crown. 5***** “
– Science Fiction & Fantasy Books

“Kell’s Legend is a blistering read; the pace is frenetic and the action scenes come thick and fast. He’s clearly honed his craft of creating pulsating action scenes during the writing of his military SF novels, for the fight sequences are often electrifying. The Vachine are a great creation, being a technologically advanced race whose members are half flesh, half clockwork, while the cankers – the result of failed clockwork experiments – are another excellent touch. The whole clockwork element is not just there for show – it provides the motivation for the Vachine’s invasion, and is also behind one the best (and most disturbing) scenes in the book.

“This is an action packed, dark adventure, not for the faint of heart. It’s relentless, the body count is insane and there’s even some pretty explicit sex thrown into the mix. Kell’s Legend is not for the prudish or the squeamish!”
– Fantasy Nibbles

“Andy Remic may have seemed like an unlikely writer to snatch up Gemmell’s battleaxe and continue to carve the fine tradition that the great man started, but he does a surprisingly good job of it. Kell’s Legend is a rip-roaring beast of a novel, a whirlwind of frantic battles and fraught relationships against a bleak background of invasion and enslavement. In other words, it takes all the vital ingredients for a good heroic fantasy novel and turns out something very pleasing indeed. If you can keep an open mind then you may get a real kick out of one of the most surprising novels of the year.”
— Speculative Horizons

“Kell’s Legend is an iconoclastic melange of themes that incorporates devices from various genres–Moorcook/Gemmell heroic fantasy, steampunk, and horror. It is an exciting, brutal novel, soaked in testosterone and paced like a roller coaster. The sex and violence is visceral and the action is non-stop.”
– Red Rook Review

“It’s been so long since we had Robin Hood, or Conan the Barbarian floating around, and Gemmell – he updated them with class. For me, Gemmell revived my favourite heroes and gave them a good kick in the pants… Mister Remic looks like he could do this, too.”
– Lateral Books

“Angry Robot has hit another genre nail on the head here and they have found something worthy of a read. Now I’ll have to find his other books…”
– Deadwood Reviews

“I have to say that I really enjoyed this novel… At the heart of this novel is a very good hack and slash but, instead of just getting blood and guts you get a fairly decent story with a really great main character and a interesting supporting cast… I have already preordered the next book in the series as I really enjoyed reading this book. If you love Gemmell you will love Remic.”
– State of Review

“Truly brilliant… it should come with a government health warning to fasten your seat belt as the pace is ferocious and leaves you breathless.”
– Aaron Advani, reviewing on the David Gemmell Legend Award website

“The Kell storyline is very high fantasy, it is the larger picture of the world that is important here. The idea of the vachine are a brilliant reimagining of both steampunk ideas and vampires. With these creatures set in a world that Remic obviously has so much as yet unrevealed history for there is nowhere to go but up.”
– SciFi-Fantasy Bookshelf

“Kell himself is an absolute bastard in many ways, his humanity largely tied to his grandaughter but he is trying to do the right thing and be a decent man… It’s a fast brutal fantasy adventure with some fun characters and some fantastic ideas. I am really excited to see the series develop.”
– Un:Bound

“It’s a fast and brutal fantasy adventure with some fun characters and some fantastic ideas. I am really excited to see the series develop.”
– Dark Fiction Review

“it’s a fine start to a heart-pounding action tale, complete with quests and durance vile. Oh, and a bad guy you can really hate. I like it!”
– Completely Booked

“This is a fast paced action fantasy novel with plenty of violence and enough plot threads to ensure you go and pick-up the next book. The characters are vivid and I genuinely have no idea where the next book is going to lead, aside from lots of bloodshed. This is well worth a read.”
– Tony’s Views