It’s a new mystery in a new town for private eye John Nyquist, as he races against gathering horrors to finally uncover the secret behind the disappearance of his father…

File Under: Horror Fantasy [ Everyday Saints | Not the Ravens | Fatherland | Written in Blood ]

Arthur C. Clarke Award-winner Jeff Noon makes a folk horror-tinged return to the world of his acclaimed Nyquist Mystery series… In the winter of 1959, private eye John Nyquist arrives in the village of Hoxley-on-the-Hale with only a package of cryptic photographs, and the frail hope of finding an answer to a question he’s been asking since his childhood. But the villagers offer little help, as each day brings a twisted new rule in the name of a different Saint that they, and Nyquist, must follow. And there are whispers of the return of the Tolly Man, an avatar of chaos in a terrible mask… As Nyquist struggles to distinguish friend from foe, and the Tolly Man draws nearer, he must race to finally settle the one mystery he has never been able to solve: the disappearance of his father… 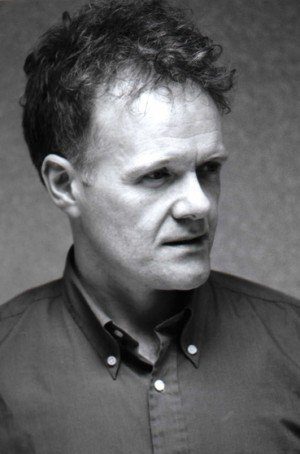 Jeff Noon is an award-winning British novelist, short story writer and playwright. He won the Arthur C Clarke Award for Vurt, the John W Campbell award for Best New Writer, a Tinniswood Award for innovation in radio drama and the Mobil prize for playwriting. He was trained in the visual arts, and was musically active on the punk scene before starting to write plays for the theatre. His last novel, The Body Library, was nominated for the Philip K Dick Award.

“It’s a heady psychedelic mix, packed with literary allusions, which brilliantly explores notions of self-identity, personal awareness and how we fit into our own stories.”
– The Guardian on The Body Library

“Rich, inventive and recommended.”
– Sci-Fi Now on The Body Library

“A moody, grimy, ruthlessly funny read… its sense of play and sly manipulation of reader expectations – about metafiction, weird fiction, and noir – is still quite the trip.”
– Barnes & Noble Sci-Fi & Fantasy Blog on The Body Library

“By writing a novel set in literature itself the author has created a new psychedelic meta-genre as well as a fantastic story that sticks in the mind long after the novel itself is read.”
– British Fantasy Society

“The Body Library is a brilliant piece of writing that does a satisfying job of merging noir, magical realism, and a love of all things literary.”
– SF Revu

“A disturbing and bizarre journey by one of the great masters of weird fiction.”
– Adrian Tchaikovsky, Arthur C Clarke Award-winning author of Children of Time on A Man of Shadows

“Noon has written a kaleidoscopic noir novel of dizzying dream logic.”
– Publishers Weekly on A Man of Shadows

“Clocks and watches form a recurrent motif in this artful, eerie novel that infuses the mystery genre with symbolism and soul.”
– Financial Times on A Man of Shadows

“Wonderful and uniquely absorbing.”
– Starburst on A Man of Shadows

“Noon is the Lewis Carroll of Manchester’s housing estates: eccentric, surreal, and ready to take everything to its most absurd conclusion. In Noon’s stories the cocktail of alienation, narcotics and gadgetry fizzes with energy.”
– The Times

“Noon is a fiercely urban writer. [He] reflects the energy of the rave generation: the hammer and twist of the music, the language of the computer games addict and the buzz of technology.”
– New Statesman

“Noon’s blend of quirky ideas, striking prose and imaginative characterisations establishes him as one of the most original voices in imaginative fiction.”
– Booklist

“Let’s call him the first of the psychedelic fantasists.”
– Time Out

“A virtual wonderland.”
– Vanity Fair on A Man of Shadows

“Humorous, horrific and wildly original… an imaginative masterpiece.”
– Library Journal on A Man of Shadows

“Observes most of the conventions of cyberpunk fiction [yet] its imagery is insistently organic, and owes more to the underground pharmacology of the rave scene than to the world of hard wired chips and user interface.”
– New Yorker on A Man of Shadows