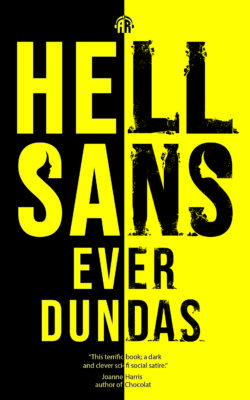 HellSans is an innovative, edgy near-future dystopian science fiction thriller that points a satirical lense on how government treats the disabled…

Hellsans is the thought-provoking new novel from award-winning author Ever Dundas HellSans is a ubiquitous typeface, enforced by the government. It appears in all communications and in all public spaces. The ultimate control device. The majority of the population experience bliss when they see it, but there are some who are allergic. Rather than being helped, the HellSans Allergic (HSAs) are persecuted, and forced to live on the streets on the outskirts of the city. Jane Ward is the CEO of the company that manufactures the Inex. This is a cyborg doll-like creature that has replaced the smart phone as the essential aid and accessory. She has everything, until she falls ill with the allergy and becomes embroiled in the government’s internal power struggles. She loses her job and her wealth and ends up on the streets. That is, until she is rescued by Dr Icho Smith. Icho is a scientist who has developed a cure for the allergy, but she is on the run from the government and the Seraphs (the ‘terrorist’ group), who all have their own agenda for the cure. Jane and Icho work together, aiming to expose government corruption and bring the cure to the HSAs. HellSans is written in three parts. Parts one and two can be read in either order which provides a unique approach to the perspectives of the haves and have-nots…

“A smart and unique dystopian thriller… Give this one to readers who like their heroes morally ambiguous.”
– Library Journal

“If you like your near future sci-fi dystopia delivered straight up, then HellSans will pull you into a dark, brilliantly imagined world. We are lucky to have Ever Dundas’ inimitable talent, HellSans’ rage, love and sorrow is perfectly contained!”
– Jenni Fagan, bestselling author of Luckenbooth

“HellSans is speculative fiction at its best: political, fearless, smart, badass. And also with tons of horrific body horror and cruelty from just about everyone. To put it down is unthinkable, you care about everything and everyone all the time.”
– Mariana Enriquez, author of International Booker shortlisted The Dangers of Smoking in Bed

“This is visceral, powerful writing that gets right under your skin, that provokes the kind of physical reaction that leaves you reeling. I was enraged, I was inspired – I want to read every word that Ever Dundas writes.”
– Helen Sedgwick, author of The Growing Season

“A violent and compelling thriller, fuelled by real anger and compassion, with far more psychological and moral complexity than the general run of dystopian fiction.”
– Lisa Tuttle, The Guardian

“HellSans is a remarkable and admirable work… the late Iain M Banks has a worthy, horrible, gimlet-eyed heir.”
– Stuart Kelly, The Scotsman

“It is a visceral and vicious novel… a body horror with brains,”
– The Skinny

“A cracking read.”
– The Times

“So smart and provocative it hurts, this fabulously unique debut is is one to place at the top of your reading lists.”
– LoveReading

PRAISE FOR GOBLIN BY EVER DUNDAS

“In my opinion, the best debut fiction by a Scottish author since 2012. Profoundly affecting, intellectually challenging and beautifully written. An instant classic of modern mythology.”
– Stuart Kelly, The Scotsman

“Enthralling… a captivating debut… Dundas presents us with an iconic protagonist: a powerful imaginative force who looks beyond the façade of 20th Century Britain.”
– Alastair Mabbott, The Herald

“A standout debut…sophisticated.”
– Nick Barley, Herald, Books of the Year 2017

“Magic Realist stories often see their hero slipping off somewhere fantastical to escape the harshness of the real world. In a good story, you’re often not sure whether these moments of magic are real or the imaginative embellishments of a vulnerable mind. In a great story, you’re left feeling like it really doesn’t matter. Goblin is a great story.”
– Ross McIndoe, The Skinny

Ever Dundas, author of HellSans, is a queer crip writer living in Edinburgh. She gained a Creative Writing Masters with Distinction from Edinburgh Napier University in 2011, and she has a First Class Degree in Psychology and Sociology from Queen Margaret University. She has had several short stories published and her debut novel Goblin won the Saltire First Book of the Year Award 2017. With fellow writer Julie Farrell, she co-founded Inklusion, a kickass guide to making literature events accessible for disabled people, launching August 2022.

Be the first to review “HellSans” Cancel reply