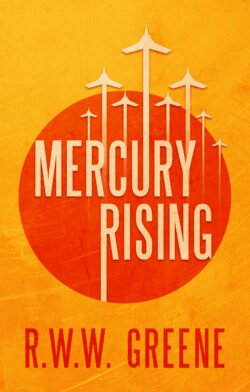 Even in a technologically-advanced, Kennedy-Didn’t-Die alternate-history, Brooklyn Lamontagne is going nowhere fast. The year is 1975, thirty years after Robert Oppenheimer invented the Oppenheimer Nuclear Engine, twenty-five years after the first human walked on the moon, and eighteen years after Jet Carson and the Eagle Seven sacrificed their lives to stop the alien invaders. Brooklyn just wants to keep his mother’s rent paid, earn a little scratch of his own, steer clear of the cops, and maybe get laid sometime in the near future. Simple pleasures, right? But a killer with a baseball bat and a mysterious box of 8-track tapes is about to make his life real complicated…

R.W.W. Greene is a New Hampshire USA writer with an MA in Fine Arts, which he exorcises in dive bars and coffee shops. He is a frequent panelist at the Boskone Science Fiction and Fantasy Convention in Boston, and his work has been in Stupefying Stories, Daily Science Fiction, New Myths, and Jersey Devil Press, among others. Greene is a past board member of the New Hampshire Writers’ Project. He keeps bees, collects typewriters, and lives with writer/artist spouse Brenda and two cats.