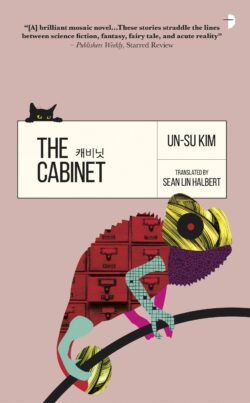 A mind-bending and fantastically funny novel from one of South Korea’s most acclaimed novelists.

Featured in the New York Times!

Winner of the Munhakdongne Novel Award, South Korea’s most prestigious literary prize Cabinet 13 looks exactly like any normal filing cabinet. Except this cabinet is filled with files on the ‘symptomers’, people whose weird abilities and bizarre experiences might just mark the emergence of a new species. But to Mr Kong, the harried office worker who spends his days looking after the cabinet, the symptomers are just a headache; from the woman whose doppelganger broke up with her boyfriend, to the man with a ginkgo tree growing from his fingertip. And then there’s that guy who won’t stop calling, asking to be turned into a cat… A richly funny and fantastical novel about the strangeness at the heart of even the most ordinary lives, from one of South Korea’s most acclaimed novelists. Translated by Sean Lin Halbert

“The Cabinet is a sly, whimsical satire of life in late-stage capitalism, slippery and surreal… a kind of echoing chamber in which the comic, heartbreaking and terrifying bounce against, amplify and distort one another.”
– Amar El-Mohtar , The New York Times

“What begins as a rather whimsical set of stories turns into a much darker novel, raising issues of difference and acceptance, what people must do to survive, and what is truly monstrous.”
– the Guardian

“Un-su Kim is a tremendous writer”
– Scott Smith, author of A Simple Plan

“This charming and fantastical book is sure to introduce Kim to a whole new legion of weird fiction fans, ideal for readers of Han Kang’s The Vegetarian and the works of Haruki Murakami.”
– Chicago Review of Books

“The Cabinet is an anti-capitalist narrative at its core, one that makes explicit the arbitrariness of capitalist expectations and assumptions. Kim deftly juggles both macro-level and micro-level ideas about social roles, purpose, and personal narrative. More of a thought experiment than a thriller, The Cabinet is a lighthearted, amusing read that nonetheless dives into some deep philosophical topics.”
– Strange Horizons