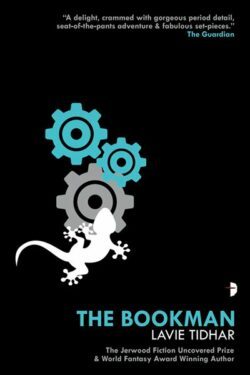 BOMB OUTRAGE IN LONDON! When his beloved is killed in a terrorist atrocity committed by the sinister Bookman, young poet Orphan becomes enmeshed in a web of secrets and lies.

The First Book in the Bookman Histories Series

When his beloved is killed in a terrorist atrocity committed by the sinister Bookman, young poet Orphan becomes enmeshed in a web of secrets and lies. His quest to uncover the truth takes him from the hidden catacombs of a London on the brink of revolution, through pirate-infested seas, to the mysterious island that may hold the secret to the origin, not only of the shadowy Bookman, but of Orphan himself… New 2016 edition includes the novelette ‘Murder in the Cathedral’. Discover, truthfully, what actually happened when Orphan visited Paris.

“Pulls off the impossible.”
– Locus

“Lavie Tidhar’s The Bookman is simply the best book I’ve read in a long time, and I read a lot of books. If you’re worried that Steampunk has turned into a mere fashion aesthetic, then you’d better read this one. It’s a stunningly imaginative remix of history, technology, literature, and Victorian adventure that’s impossible to put down. The book is immensely smart and readable at the same time. I very much hope that it’s the first of many such books. Buy it.”
– James P Blaylock

“The Bookman is without a doubt the most enjoyable, fascinating and captivating book I have read in a long time. It has managed to claim the throne as my favorite steampunk novel from Moorcock’s A Nomad of the Time Streams… Not only because of the plot and the world with its automatons, simulacra and the giant space cannon, it is also in itself an intricate work of art, very much like clockwork. The story’s depth is revealed piece by piece, gear by gear, during the entire length of the novel up until the end, which makes for a very exciting and captivating read. It took me very much until the last chapter to piece all the details together, combine all the different gears and cogwheels to one beautiful apparatus, to grasp the full expanse of what was actually going on right from the start of the novel. Finally in the end I understood and was left with the images of a truly fascinating story and world in my mind. But it is not only the depth of the plot, its many twists and mysteries which kept me glued to its pages, it is also the cast of characters and the many striking details of the world, which make this book so enjoyable.”
– Dailysteampunk.com

“I enjoyed the book and found myself drawn into the world quite substantially. Its our world, but not quite–with a much larger emphasis on reading and authors, as well as a society where the power of words really can be more powerful then any other weapon known.”
– Poisoned Rationality

“Self-contained and with a great ending, The Bookman seems to be part of a planned series and I really am happy about that since I want more of this wonderful milieu… Just big time fun,”The Bookman” is highly, highly recommended.”
– Fantasy Book Critic

“The punkgenre has a new term, BookPunk. The Bookman pokes at the fat and waddled body of steampunk with its walking cane and leaves it on the roadside with its fresh take on Victorian London without loosing any steam on its way.”
– Loudmouth Man

“This is a steampunk gem. The settings are marvellously detailed, giving you the feeling that there is a London in which Lizards reign and whales swim up the Thames to sing lullabies to the city dwellers… Bring on a sequel, Tidhar! I’m craving to know what happens after the ending!”
– SFF World

“The Bookman is a delight, crammed with gorgeous period detail, seat-of-the-pants adventure and fabulous set-pieces.”
– The Guardian

“A sequel is in the offing and I can hardly wait. I could write much more but I want you to discover this novel’s delights for yourself. Do I need to add that this is highly recommended? 5*****”
– Free Thinking

“His writing is easy on the mind, and deceptively smooth. His vision is surprising, and intricate within a simplistic frame. There’s a lot of nods to popular steampunk inspirations, and plenty of opportunities for you to chuckle at his references and the marvellous way he weaves his references into his novel. And it even has pirates, too. I mean, it has it all. Except ninjas. For now.”
– Lateral Books

“The world building is immense as Tidhar has warped history into something altogether wonderful and exciting, which also shows the authors great love for the written word and the power it can convey.”
– The Mad Hatter’s Bookshelf and Book Review

“The juicy backstory is unfolded by Tidhar, making it a key part of what makes the narrative so compelling… skilful, clever and highly enjoyable. 4****”
– SFX Magazine

“Not only an interesting read but also one that leads the reader to ask more questions than is answered within the text supplied… A promising start and I hope that the follow-ups are just as interesting.”
– Falcata Times

“In The Bookman, Tidhar has created a wonderfully clever world, relying either on a house full of Victorian-era books or a heavily stamped library card and late fees. Either way, many of Tidhar’s creations are fantastic, a standout being the simulacra of Lord Byron, a robot designed to recall the great Romantic poet. With a sigh he will admit that he doesn’t have the original Byron’s love of poetry.”
– FantasyLiterature.com

“The writing is beautiful and flows so well you’ll be farther along the journey than you realize when you finally come up for air. Tidhar had me engaged throughout the book; from the set up during the first part, where he introduces us to his alternate Britain and its inhabitants, to the rollicking excitement of Orphan as he seeks out the Bookman and finally, to the climax where answers to mysteries are revealed and the whole grand design is wrapped up in a big, bodacious bow.”
– Benito Corral Reviews

“Lavie Tidhar’s mind must be fascinating place in which to live. It certainly is an exceeding pleasure to visit. … I honestly love The Bookman and would happily reread it. It is a delight, from start to finish.”
– Rob Will Review

“…an intelligent, clever book, that creates a wonderfully complex secondary world … as well-constructed as a Swiss cuckoo clock and as readable as any genre fiction being written today.”
– Red Rook Review