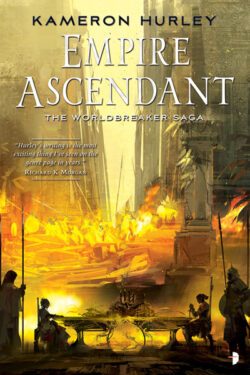 “The Mirror Empire is the most original fantasy I’ve read in a long time, set in a world full of new ideas, expanding the horizons of the genre. A complex and intricate book full of elegant ideas and finely-drawn characters.”
– Adrian Tchaikovsky, Arthur C Clarke award-winning author of Children of Time

As the convergence between the two worlds strengthens, alliances are made and broken, magic and mayhem abound, and before it’s all done, at least one world will be shattered and broken.

File Under: Fantasy [ Empire of Fire | Duplicates at War | The Royal Exchange | All Will Fall ]

The Second Book in the Worldbreaker Saga Series

Loyalties are tested when worlds collide… Every two thousand years, the dark star Oma appears in the sky, bringing with it a tide of death and destruction. And those who survive must contend with friends and enemies newly imbued with violent powers. The kingdom of Saiduan already lies in ruin, decimated by invaders from another world who share the faces of those they seek to destroy. Now the nation of Dhai is under siege by the same force. Their only hope for survival lies in the hands of an illegitimate ruler and a scullery maid with a powerful – but unpredictable –magic. As the foreign Empire spreads across the world like a disease, one of their former allies takes up her Empress’s sword again to unseat them, and two enslaved scholars begin a treacherous journey home with a long-lost secret that they hope is the key to the Empire’s undoing. But when the enemy shares your own face, who can be trusted? In this devastating sequel to The Mirror Empire, Kameron Hurley transports us back to a land of blood mages and sentient plants, dark magic, and warfare on a scale that spans worlds.

“It’s epic in the truest sense of the world, and fantastic in a completely original and inventive way…I read all 400-odd pages in about 12 hours, ignoring all else. My guess is you will too.”
– Ysabeau Wilce for Locus

“Kameron Hurley warned us all on twitter that Terrible Things would befall the characters introduced in The Mirror Empire, and she did not lie. But she also didn’t give the whole truth. Empire Ascendant is a deeply complicated book. Yes, it is dark and brutal. But it is also almost bizarrely hopeful.”
– B R Sanders, Clatter and Clank

“Empire Ascendant is a masterful addition to the epic fantasy genre.”
– Borrowed Worlds

“If any book deserves to be converted into a black metal saga it is this one.”
– Simon McNeil, author of Trillium

“Recommended for fans of Game of Thrones and The Emperor’s Blades. Intricate, unforgiving, and fascinating.”
– Libromancer’s Apprentice

“Hurley has put together something very special. There are complex characters. There’s a believable, if broken world. There’s a plot which will absolutely knock your socks off, if you’re prepared to let it. But it’s also a book willing to explore more deeply, to challenge reader preconceptions and expectations, to ask the reader to invest themselves, and willing to repay that investment in a mixture of enlightenment and blood. That depth, and that narrative bravery, makes Empire Ascendant not just a very good fantasy novel, but a great one – and one very highly recommended.”
– SF and F Reviews

“[Kameron Hurley] stated on twitter that this is to the first book what Empire Strikes Back is to Star Wars, but I feel she sells herself short. This book, in how it grows the themes of The Mirror Empire and builds them to dizzying, breathtaking heights is more of a Godfather Part II. Everything about it is better, greater, grander than what came before.”
– View from Ascraeus

“This series just keeps getting better. It’s one of the most complex sci-fi series I’ve read yet I quickly got back into its worlds. Should you read it? If you love digging deep into worlds and relationships among divergent people, as well as exploring what makes people tick, then I think you’ll really like this series.”
– Popcorn Reads

“There is something about picking up the second in a series. You already know you like the concept or you wouldn’t bother to continue, but this time it’s different. The story has to hold up not only to its internal standard but to your memories of the first book and it takes a skilled author to manage that. Luckily Kameron Hurley counts as a skilled author and in Empire Ascendant she unravels the story into something even bigger without once dropping the thread.”
– Nerd Underground

“Although this is a second (or middle) book, things actually happen here. With the world, the scenario, and the characters already established, Hurley is free to focus on the action – and she delivers that in spades. This is a fast-paced tale that carries a sense of urgency from page one.”
– The Speculative Herald

“This is epic fantasy at its best! Every fantasy reader should read this series!”
– Bull Spec

“Read this book. Well, start with book one The Mirror Empire and then once you’ve been sucked into this ‘verse go read this one…I was totally immersed in this story.”
– Susan Hated Literature

“My most anticipated novel of the year. I’ll go ahead and say outright that it was both worth the wait and satisfied my expectations.”
– The Dinglehopper

“This is one of those books that tears your heart out, takes a big bite out of it, and then smushes it back into place and hopes you can recover. Gory image? Well, you’d better get used to it if you want to take on this series! I’m usually terrified of gore and avoid books that are really bloody because I can’t stomach it, but there is just something about this series that keeps me fascinated and glued to the pages even when I am internally running away screaming.”
– Snowflakes and Spider Silk

“With the world, the scenario, and the characters already established, Hurley is free to focus on the action – and she delivers that in spades. This is a fast-paced tale that carries a sense of urgency from page one. You can feel the tension oozing off the page as the characters clash, cultures collide, and worlds approach an end. The plot develops as much, if not more so, than in the first book – and not always in ways you’d expect. There are twists and turns to the tale that even the most jaded readers won’t see coming, as the story careens downhill towards an uncomfortable precipice.”
– Beauty in Ruins

“If you’re a fan of intense fantasy with an impressive death toll, Empire Ascendant by Kameron Hurley is the book for you.”
– Knitter Nerd

“I have become a Kameron Hurley… fangirl? Devotee? Acolyte? I’ll say this to those who already read The Mirror Empire: Yes, you want to read this too, and no, you will not be disappointed.”
– Fat Robot

“Hurley manages to break her main characters worlds apart without flinching, never pulling her punches, but without making it feel as if she’s killing of characters for shock value. She makes the adversaries in the book if not sympathetic, at least understandable in their motivations, which makes everything even more complicated in the feelings department. I loved the directions some of the characters developed in and I wonder how this epic conflict will be resolved in the final book next year.”
– A Fantastical Librarian

“The world she created for this series is so imaginative and cool, but most importantly, the story is well done. Her characters are amazing; her prose also.”
– Odd Leopards, Strange Cats