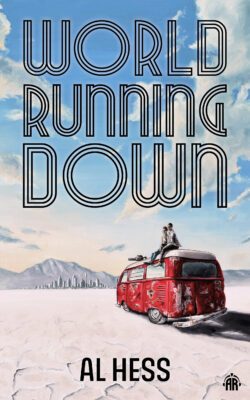 A transgender salvager on the outskirts of Utah gets the chance to earn the ultimate score and maybe even a dash of romance. But there’s no such thing as a free lunch…

Valentine Weis is a salvager in the future wastelands of Utah. Wrestling with body dysphoria, he dreams of earning enough money to afford citizenship in Salt Lake City – a utopia where the testosterone and surgery he needs to transition is free, the food is plentiful, and folk are much less likely to be shot full of arrows by salt pirates. But earning that kind of money is a pipe dream, until he meets the exceptionally handsome Osric.
Once a powerful AI in Salt Lake City, Osric has been forced into an android body against his will and sent into the wasteland to offer Valentine a job on behalf of his new employer – an escort service seeking to retrieve their stolen androids. The reward is a visa into the city, and a chance at the life Valentine’s always dreamed of. But as they attempt to recover the “merchandise”, they encounter a problem: the android ladies are becoming self-aware, and have no interest in returning to their old lives.
The prize is tempting, but carrying out the job would go against everything Valentine stands for, and would threaten the fragile found family that’s kept him alive so far. He’ll need to decide whether to risk his own dream in order to give the AI a chance to live theirs.

“A piercing mix of relevant social commentary braided into a riveting scifi adventure.”
– Sunyi Dean, author of The Book Eaters

“Full of adventure, charm, and deeply human insights, the world in Hess’s World Running Down is an apocalypse you won’t want to leave.”
– Seth Fried, author of The Municipalists

“Hess’s debut makes me glad I’m a reader because I couldn’t have gotten this story any other way. Books, like Hess’s characters, still dare to love.”
– R.W.W. Greene, author of Twenty-Five to Life

Al Hess is the author of the self-published post-apocalyptic Travelers series and the 1930s flavoured dystopian series, Hep Cats of Boise.  When not hunched before a computer screen, Al can be found at his art desk. He does portraits in both pencil and oil paint, and loves drawing fellow authors’ characters nearly as much as his own. He writes cozy and uplifting stories with queer, trans, and neurodiverse representation.