In a fantastical version of Renaissance Italy panicked by plague, the Medicis and the Lorraines tear the city apart with alchemy and amazing gadgets. Meanwhile a pair of star-crossed lovers seek to save their love, with the assistance (or perhaps despite the assistance of) a mysterious figure: the Shadow Master.

In a land riven with plague, in the infamous Walled City, two families vie for control – the Medicis with their genius inventor Leonardo; the Lorraines with Galileo, the most brilliant alchemist of his generation. And when two star-crossed lovers, one from either house, threaten the status quo, a third, shadowy power – one that forever seems a step ahead of all of the familial warring – plots and schemes, and bides its time, ready for the moment to attack… 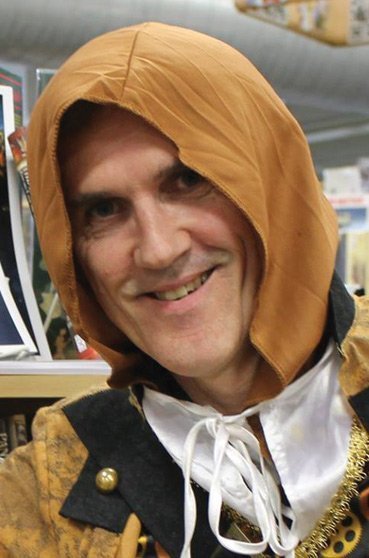 Craig Cormick is an award-winning author and science communicator who works for Australia's premier science institution, the Commonwealth Science and Industrial Research Organisation (CSIRO). He is a regular speaker at science communication conferences and has appeared on television, radio, online and in print media. As an author he has published over a dozen works of fiction and non-fiction and over 100 short stories. His awards include an ACT Book of the Year Award and a Queensland Premier's Literary Award. His most recent book is the young adult novel Time Vandals (Scholastic, 2012).

“The Shadow Master is one of the best written books that I have come across in a long time when you look at the narration and writing style that Craig Cormick uses it is just impossible to let this book down for just a few minutes. The whole idea behind the story of The Shadow Master again is something that I haven’t encountered in a long while, yes I read fairy tale adaptations but a retelling of Romeo and Juliet wasn’t something that I had dared to imagine. And lets above all not forget the ever presence of two of histories most adapt inventors: Da Vinci and Galileo. Pretty cool and Craig Cormick really knows how to build the right setting for the occasion. I have high hopes for the sequel.”
– The Book Plank

“What I did not expect when I first read the synopsis for this novel was Cormick’s dark sense of humor. This is a story filled with assassins, murders, kidnappings, and both graphic and unsettling visuals. But even in some of the darkest parts of the book I found myself laughing out loud. I guess if I would have to make up a genre for The Shadow Master it would be called acid grimdark.”
– Avid Fantasy Reviews

“I recommend you to read The Shadow Master, a story that takes an adventure where love is the key for everything; happiness, justice, revenge, and always does what is better for the everyone. Read of a land lost to diseases and a battle for power where there is more than just two adversaries but much more hidden in the shadows.”
– Open Book Society

“I really enjoyed my time spent with The Shadow Master. The dynamic between the two families was interesting and I loved the rivalry – that wasn’t really one – between Leonardo and Galileo. There were also some fun nods to some of their real historic works and inventions. I especially loved the way Cormick incorporated The Vitruvian Man in the story. The idea that magic is as much artifice as it is alchemical was intriguing, especially considering that one doesn’t need to have any nebulous aptitude, but just have a rigorous mind. Additionally, here is magic that isn’t without cost. It’ll be interesting to see if this magic system will be transferred to the next book or if Cormick creates a different one”.
– A Fantastical Librarian