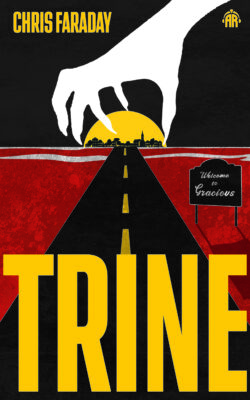 A young girl holds a vital part of a weapon used to kill a nightmarish creature in her amulet. When she’s kidnapped, her apathetic brother must return to his small town and work with the woman he jilted in order to save her and the world.

A small town is plagued with mystery and an evil entity in Chris Faraday’s latest horror novel!  Two years after jilting his bride and escaping his hometown of Gracious, Brad Van Reed returns to the aid of his eleven year old sister, Kristen. Though he’s having a hard time believing that the old amulet in her possession gives her the power to create sinkholes or see that an evil entity named Nowhere Man is coming for her, Brad’s intent on helping her through this phase. But then, Kristen’s kidnapped by toxic creatures who claim to be under Nowhere Man’s thrall. Left with nowhere else to go, Brad seeks out the help of his former fiancé and aspiring astrophysicist, Felicity. But Felicity has new problems of her own: while seeking out a meteorite that supposedly fell to the mountains surrounding Gracious in the nineteenth century, her girlfriend Emily “Flick” Flickinger falls under the thrall of Nowhere Man and flees into the wilderness. Joining forces with crusty recluse Joseph LeFevre, Brad and Felicity stumble on a device similar to Kristen’s locket. These make up two parts of a powerful ancient weapon designed to stop Nowhere Man, but the third is missing. Can they find the long lost third item before it’s too late? Take an exclusive sneak-peek over on SciFiNow!

A long-time fan of speculative fiction, Chris Faraday has been writing his whole life. His earliest novels included Martians clambering into buildings, nuclear cannons and shapeshifting monsters causing general havoc to the population. These earliest novels were unpublished, juvenile efforts, filled with the same imagination Chris carries now. Trine is his latest novel, and features a town plagued with mystery, and an evil entity who yearns for power. Chris resides in Pennsylvania, where he continues to conjure stories that look at how humans interact in the face of peril. Oh, and shapeshifting monsters, too.

Be the first to review “Trine” Cancel reply