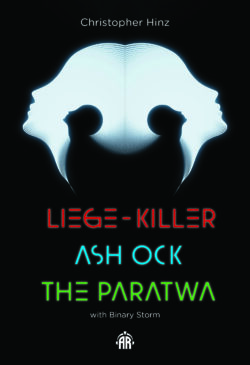 by: Christopher Hinz
Buy the ebook version now – only £10.99

The omnibus edition of Christopher Hinz’s cult-classic, The Paratwa Saga

Two hundred years after a nuclear apocalypse forced humanity to flee earth, humans still remember the most feared warriors of that planet – the Paratwa. These are genetically modified killers who occupy two bodies controlled by one vicious mind. The legendary Paratwa named Reemul, known as the Liege-Killer, was the strongest of them all. Now someone has revived Reemul from stasis and sent him to terrorize the peaceful orbital colonies of Earth. Is this an isolated incident, or has the one who unleashed this terrible power announced a gambit for control over the entire human race?

A quarter of a millennium ago, before the nuclear apocalypse forced the inhabitants of earth to flee their home planet, few humans could have imagined the course their path would take. Now, the orbital colonies are the final sanctuary of humanity and life is more dangerous than ever before. The colonists fear the return of their dreaded enemies, the Paratwa – ferocious warriors who are genetically engineered to exist in two bodies which remain telepathically connected. The new generation of Paratwa is far deadlier than the old, forming a powerful caste of fighter known as the Ash Ock. A mysterious virus infecting the humans database signals the return of their most feared enemies…

The lives of the Irryan colonists hang in the balance, as they prepare for the imminent attack of the fierce and vicious Paratwa assassins. Facing the threat of their dark enemies, Gillian must also cope with his inner turmoil, as the madness of his nature threatens to consume his life, until he discovers that he is a genetically modified creature whose purpose is to serve the needs of others, and the course of his destiny is not in his own hands… The concluding volume to the epic masterwork from a cult sci fi master.

Be the first to review “The Paratwa Saga” Cancel reply