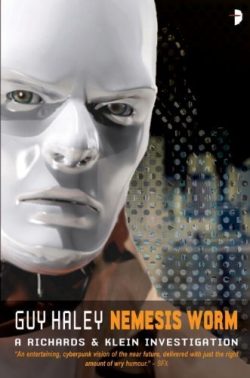 A standalone novella featuring the 22nd century’s greatest detectives, The Nemesis Worm sees Richards & Klein involved in another high stakes investigation. Corpses are showing up all over Old London, and the finger of suspicion points right at Richards himself. Forced to clear his name, Richards and Otto uncover a fanatical group whose actions threaten the relationship between human and AI with destruction.

Praise for the Richards & Klein series

“Haley’s wit is both laugh-out-loud and sharp as a sword.”
– John Whitbourn

“It’s an actual glimpse into the future as much as it’s a mystery yarn and an action thriller. Isn’t that what Science Fiction is all about? While Robopocalypse is this year’s hottest robot release … Reality 36 is a superior novel in almost every way.”
– Staffer’s Musings

“Guy Haley is the new author I have been waiting for. It has the intense action of a Neal Asher book, you can almost feel the shockwave of explosions and the impact of blows. Unless you hate fun, stop what you are doing and pick up Reality 36. It’s an action packed book, riddled with armour-piercing wit and incredibly entertaining.”
– I Will Read Books

“It is excellent. I really loved it. Even when I was a couple chapters in I was still sceptical. Then, suddenly, it didn’t matter. I was got used to acronyms, learnt who was who, and was immersed in a gripping storyline that was part Blade Runner, part I, Robotand part Sherlock Holmes.”
– I Wish I Was a Book

“Haley does a brilliant job of bringing these former game characters to life… The worlds Haley builds are easy to buy into and the plot is so compelling that it would be hard not to be swept into its pull.”
– examiner.com

“It feels believable and well thought out. It is a world I would like to learn more of. As you understand by now I really liked Reality 36. It got a fast pace, is humorous in tone, filled with action, combat and robots a great debut. Guy Haley is a writer to watch.”
– Cybermage

“The book is very much a post cyberpunk detective story and one that has been written by an incredibly talented author – this is another Angry Robot publication and boy can they pick their novels!”
– SF Book Reviews

Guy Haley is the author of over 40 novels and novellas. His original fiction includes Crash, Champion of Mars, and the Richards and Klein, Dreaming Cities, and the Gates of the World series (as K M McKinley). However, he is best known as a prolific contributor to Games Workshop's Black Library imprint, and has sold over 1.3 million books set in their Warhammer universes.
He lives in Hebden Bridge, with his wife, son and a malamute.
Haley said: “I thank whichever omnipotent deity that’s listening for Angry Robot. The opportunities for new writers are few and far between these days, so hurrah for an imprint that’s not afraid to go hunting out new talent – which includes me. I can’t wait to please my Robot Overlords, though I refuse to do any happy time oiling, that’s not in my contract. It’s just writing. Honest.” Angry Robot Publishing Director Marc Gascoigne added: “We already have a proud tradition at AR of investing in new writers, and in Guy’s case it was a no-brainer. Richards and Klein are brilliant creations, and their adventures wonderfully entertaining. But if Guy thinks he’s going to get off oiling duty, he should check the small print in his contract.”