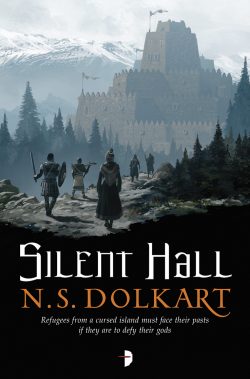 A coward’s son, a merchant’s daughter, a young prince, a wild girl, and a half-dragon all find themselves refugees from their island home. When a plague destroys their home, they try to forge their own future. Along with a sinister wizard, they awaken a dragon and defy the gods.

The first book in the Godserfs series

After their homeland is struck with a deadly plague, five refugees cross the continent searching for answers. Instead they find Psander, a wizard whose fortress is invisible to the gods, and who is willing to sacrifice anything ‘ and anyone ‘ to keep the knowledge of the wizards safe. With Psander as their patron, the refugees cross the mountains, brave the territory of their sworn enemies, confront a hostile ocean and even traverse the world of the fairies in search of magic powerful enough to save themselves ‘ and Psander’s library ‘ from the wrath of the gods. All they need to do is to rescue an imprisoned dragon and unleash a primordial monster upon the world. How hard could it be?

“A great, mythological sort of story that brings all of high fantasy’s good stuff to the table without having all that Good Ol’ Boy fantasy nonsense of its genre predecessors from the 90s and early 2000s.“
– Jasmine Gower, author of Moonshine

“Dragonlance, with a Breakfast Club‘s worth of unlikely heroes brought together to complete quests for a wizard, BUT within that framework Dolkart has fun and subverts with the conventions by bringing some ugly reality to the tropes… if you have fond memories of David Eddings, Terry Brooks, and Weiss and Hickman, but wish they were a little bit more socially engaged and relevant, you might be surprised by how much you like Silent Hall.”
– 10 Bad Habits