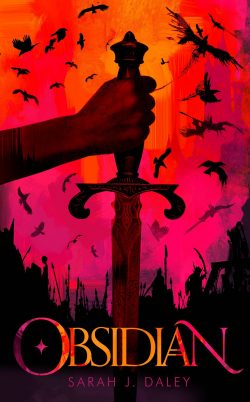 Shade Nox is an abomination and a wanted criminal. When she is called upon to raise a Veil to protect her people, she discovers a road much rockier than she expected, made no easier by Raiden Mad – Imperial emissary – who intends to capture and imprison her…

File Under: Fantasy [ Tattoos At Dawn | Underestimated Women | Old Jealousies | The End of Whose World ]

Shade Nox is an abomination and a wanted criminal. She wears her tattoos openly as any bloodwizard would, and carries obsidian blades at her hips. She scratches out a dangerous living in the broken Wastes, but now that they are growing more unstable and dangerous, Shade and her people need a Veil to protect them. She vows to raise one – a feat not accomplished in over a hundred years, and never performed by a woman. The Veils are controlled by the Brotherhood, who consider them sacred creations; they would sooner see them all collapse into dust than allow a witch to raise one. With the help of her friends and allies, and her own indomitable will, Shade stays one step ahead of her enemies. But when she learns the true sacrifice required to raise a Veil – a secret even the centuries-old Brotherhood has forgotten – it is too high a price to pay. Nevertheless, she must pay it, or she will lose everything and everyone she loves…

“Readers looking for a Dune read-alike will find this epic fantasy a treat with its scenario of oppressive government and ecological catastrophe being fought by heroic desert dwellers with mysterious powers and a complete disregard for the powers-that-be. They’ll be left hoping this fantastic adventure has a sequel.”
– Library Journal, debut of the month

“This will satisfy many readers looking for fast-paced fantasy and kickass protagonists in the vein of Empire of Sand and The Assassin’s Curse.”
– Booklist

“Electric character relationships and masterful worldbuilding—encompassing a spectacular magic system, mystical urban legend, and profound mystery—are sure to impress. Those looking for fantasy with a dystopian flair should snap this up.”
– Publisher’s Weekly

“Sarah J Daley’s deftly-crafted debut, Obsidian, introduces us to the island nation of Malavita, protected by the magically-erected “Veils”, separating its population from the demonic blight of the barren wastes. Malavita is ruled from afar by an Empire keen to exploit its rich natural resources, and by the corrupt Brotherhood of blood magicians. Into this complex political landscape the Empire sends Captain Raiden Mad, to explore the possibility of erecting a new Veil with the help of a local prince and an outlaw witch. Daley weaves a powerful tale of friendship, power and sacrifice, with a rich cast of characters led by loyalty and ambition. A sure crowd-pleaser.”
– Gabriela Houston, author of The Second Bell and The Wind Child

“Full of fun and fresh twists on the usual fantasy fare, with compelling heroes, an engaging plot, sizzling tension, and smart dialogue, Obsidian is a joy.“
– Dan Hanks, author of Swashbucklers

Sarah J. Daley is a former chef who lives and writes in the Chicago Metropolitan area with her husband and teenaged son. She earned a degree in Landscape Architecture from the University of Illinois at Champaign-Urbana. Though she still enjoys the heat and chaos of a professional kitchen, she is now writing full-time. She enjoys traveling, creating costumes for comic con, riding the occasional horse, and streaming old sitcoms for background noise.