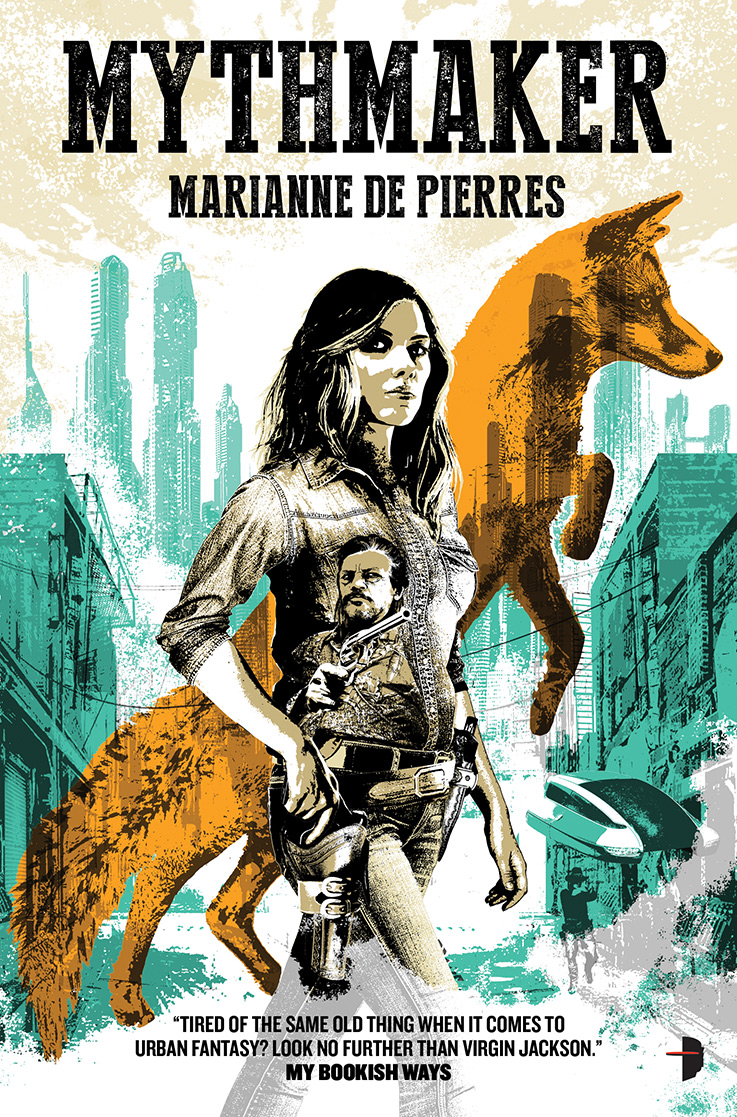 With a murder rap hanging over her head, Virgin has little choice but to take a new case with the Global Joint Intelligence Commission. And if that wasn’t enough, Mythos events are on the rise…

The sequel to Peacemaker

Virgin’s in a tight spot. A murder rap hangs over her head and isn’t likely to go away unless she agrees to work for an organisation called GJIC (the Global Joint Intelligence Commission). Being blackmailed is one thing, discovering that her mother is both alive and the President of GJIC is quite another. Then there’s the escalation of Mythos sightings and the bounty on her head. Oddly, Hamish is the only one she can rely on. Life is complicated.

“These books read like a cross between old Clint Eastwood spaghetti westerns fused with Robert A. Heinlein, Frank Herbert or Alfred Bester. It is an awesome mix of western, soft science fiction and a strong bent to religious studies or spiritual realities. The three authors mentioned above all among my all time favourites going back to when I was just a teen gorging on any book I could get my hands on, and comparing de Pierres to them is among the highest praise I can give.”
– Book Reviews and More

“I can easily say that while I very much enjoyed Peacemaker, I adored Mythmaker. It’s like nothing else I’ve read before. The mashing of genres, the world, the action of the city and the solace of the park, the suspense and the detective work. Marianne de Pierres makes this type of story-telling an art-form, but best of all, she does it with characters and relationships you can’t help but fall in love with.”
– MandyWrangles

“If you are looking for unique, beautifully written urban fantasy, this series is for you. Peacemaker and Mythmaker are visionary and deeply satisfying books to read.”
– The Conversationalist

“de Pierres has crafted a weird and wonderful world, populated it with various larger than life characters, and makes sure there is plenty of friction between each and every one of them.”
– Fantasy Book Review

“Set within the glorious backdrop of a desolate Australian outback, Mythmaker blends the energy of an old style Western with the splendour of classic SF. Hypnotic, lyrical language adds depth to this background, which Virgin is desperately trying to conserve.”
– Terror Tree

“In Mythmaker, de Pierres, once again immerses us in her writing with terrific world building and a cracking pace. The genre blending of western, crime, sci-fi and fantasy still held all its appeal as it did in the first book and the characters just get even better.”
– Views & Reviews

“If you liked Peacemaker and want to read more about the characters, then I definitely recommend reading Mythmaker.”
– Tsana’s Reads & Reviews

Marianne de Pierres is the author of the acclaimed Parrish Plessis and award-winning Sentients of Orion science fiction series. The Parrish Plessis series has been translated into eight languages and adapted into a roleplaying game. She's also the author of a bestselling teen dark fantasy series entitled Night Creatures and writes award-winning crime under the pseudonym Marianne Delacourt. She lives in Brisbane, Australia.