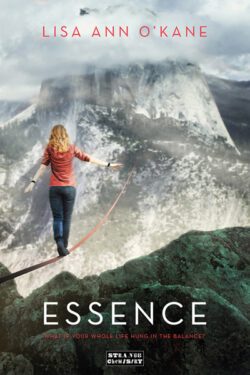 “Essence has everything you’d want: excitement, romance, danger and enough intrigue that I kept reading faster and faster to find out what was going to happen next.”
– Bethany Frenette, author of Dark Star and Burn Bright

Neutrality is the key to longevity.

This motto has governed 16-year-old Autumn’s life in the mid-21st-century Centrist cult, which believes that expressing emotions leads to Essence drain and premature death.

But Autumn’s younger brother’s death casts her faith into question. While sprinting through a park in violation of Centrist teachings, she encounters Ryder Stone, an Outsider who claims Essence drain is nothing more than a Centrist scare tactic. She agrees to join his Community, a utopia of adrenaline junkies living in the abandoned remains of Yosemite National Park.

Autumn learns about sex, drugs, and living life to the fullest. But as she discovers dark secrets beneath the Community’s perfect exterior, she realises that this illusion of paradise could be shattered…

Autumn escaped a cult, but now she realizes she’s fallen into another. Growing up in San Francisco’s Centrist Movement, sixteen year-old Autumn Grace has always believed emotions – adrenaline, endorphins, even happiness – drain your Essence and lead to an early death. But her younger brother’s passing and a run-in with a group of Outsiders casts her faith into question. Ryder Stone, the sexy, rebellious leader of the Outsiders, claims Essence drain is nothing more than a Centrist scare tactic – and he can prove it. Autumn follows Ryder to his Community of adrenaline junkies and free spirits in Yosemite National Park, and they introduce her to a life of adventure, romance, sex, drugs and freedom. But as she discovers dark secrets beneath the Community’s perfect exterior, she realizes the more she risks in search of the perfect rush, the further she has to fall.

“For anyone who has ever wanted to break loose and live life on the wild side, this book serves up a great helping of action scenes that will satisfy the literary adrenaline junkie every time.”
– Sarah J Schmitt, author of It’s a Wonderful Death

“This is kind of the ultimate summer read for me–fast paced without being fluffy, addictive writing that doesn’t drop in quality.”
– Rachel Miller, Giant Squid Books

“I loved every second of Essence, and as soon as I finished it I wanted to start reading it all over again. And I still probably will.”
– Ashley Ferguson, The AP Book Club

“ The writing itself is crisp and clear, and loving Yosemite as I do, I really enjoyed the setting for most of this.”
– Looking For A Good Book

“The story’s strength lies in its evocative setting and the vicarious thrill of wild parties and daring stunts in one of the most beautiful natural areas in the United States…quick, action-packed read”
– Owl Cat Mountain

Lisa Ann O’Kane is a young adult author and former vagabond who once camped out in Yosemite National Park for an entire summer, an experience that inspired her debut novel Essence. Her background is in zookeeping and environmental education, and she has been kicked, cornered, bitten and chased by nearly every animal she has ever loved. She currently resides in Florida, and she is now a huge fan of shooting stars, indoor plumbing and keeping both her feet planted firmly on the trail.