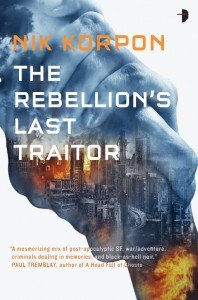 Start reading The Rebellion’s Last Traitor by Nik Korpon right now. A gritty blend of post-apocalyptic SF and adventure, called “an explosive tale of betrayal and revenge in which allegiances prove as dangerous and unreliable as the memories the citizens of Eitan City buy and sell” by Chris Holm, Anthony Award-winning author of Red Right Hand. After decades of war, the brutal Tathadann Party restored order in Eitan City by outlawing the past in order to rewrite history. Memory became a commodity – bought and sold, and experienced like a drug. For ten years, Henraek and Walleus led a people’s rebellion, until Walleus recognized what the others couldn’t: the Struggle was doomed. He joined the Tathadann, and Henraek, hurt and angry, incited a riot that killed his own wife and son. Now Henraek works as a Tathadann memory thief, draining citizens’ memories while mourning his family. The people call him a traitor to his face; Tathadann spies whisper he’s a traitor behind his back. Walleus protects Henraek, but Henraek knows that loyalty has its limits. Then everything changes when Henraek harvests a memory of his wife’s death. He will do whatever it takes to learn the truth – even if it means burning Eitan City to the ground. The uprising begins here: The Rebellion’s Last Traitor is released on 1 June (UK & ebook) / 6 June (US/CAN) and is available everywhere books are sold.

Happy Friday! If you haven’t explored the City of 100 Rows, now is an excellent time. The first in Ian Whates’ amazing […]