The Dreaming Stars by Tim Pratt has a cover! The much awaited sequel to The Wrong Stars, a mind blowing and thoughtful space opera which was shortlisted for this year’s Philip K Dick Award. If you’re yet to catch up on The Wrong Stars then unless you’re busy fighting aliens in unknown space there’s no excuse not to do so before The Dreaming Stars hits shelves this September. You can even buy if for just £5.49 (or equivalent) right here before whetting your whistle on The Dreaming Stars‘ synopsis below:

Ancient aliens, the Axiom, will kill us all – when they wake up. In deep space, a swarm of nanoparticles threatens the colonies, transforming everything it meets into computronium – including the colonists. The crew of the White Raven investigate, and discover an Axiom facility filled with aliens hibernating while their minds roam a vast virtual reality. The treacherous Sebastien wakes up, claiming his altered brain architecture can help the crew deactivate the swarm – from inside the Axiom simulation. To protect humanity, beleaguered Captain Callie Machedo must trust him, but if Sebastien still plans to dominate the universe using Axiom tech, they could be in a whole lot of trouble. So now that you know what you’re in for, just click the sneak peak image to see the full cover, and the first chapter of this epic space opera, on the B&N Fantasy and Sci-Fi Blog. Thank you so much to the incredible Paul Scott Canavan for this amazing cover! Sadly though we don’t think it will keep the Axiom at bay.

As the Ancient Greeks know, trying to kill Gods is a really bad idea. Alas Brogan McTyre and his band of friends […] 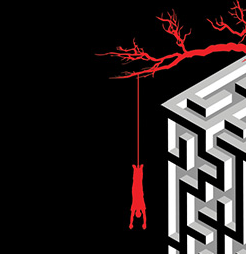 It’s here. Oh my GOODNESS, it’s here! The new cover for Jeff Noon‘s The Body Library has arrived and it’s just as […]

It’s here! The cover for Anna Kashina’s newest novel, Shadowblade, has arrived and let us tell you, it is GORGEOUS. Shadowblade – […]