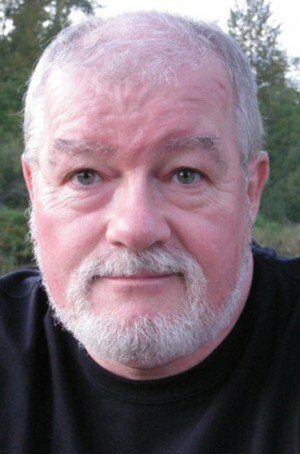 The name I answer to is Matt Hughes. I write fantasy and suspense fiction. To keep the two genres separate, I now use my full name, Matthew Hughes, for fantasy, and the shorter form for the crime stuff. I was born sixty years ago in Liverpool, England, but my family moved to Canada when I was five. I’ve made my living as a writer all of my adult life, first as a journalist, then as a staff speechwriter to the Canadian Ministers of Justice and Environment, and – from 1979 until a few years back – as a freelance corporate and political speechwriter in British Columbia. I am a former director of the Federation of British Columbia Writers and I used to belong to Mensa Canada, but these days I’m conserving my energies to write fiction. I’m a university drop-out from a working poor background. Before getting into newspapers, I worked in a factory that made school desks, drove a grocery delivery truck, was night janitor in a GM dealership, and did a short stint as an orderly in a private mental hospital. As a teenager, I served a year as a volunteer with the Company of Young Canadians (something like VISTA in the US). I’ve been married to a very patient woman since the late 1960s, and I have three grown sons. I have of late taken up the secondary occupation of housesitter, so that I can afford to keep on writing fiction yet still eat every day. These days, I’m in Northern Ireland but any snail-mail address of mine must be considered temporary. I’m always interested to hear from people who’ve read my work.