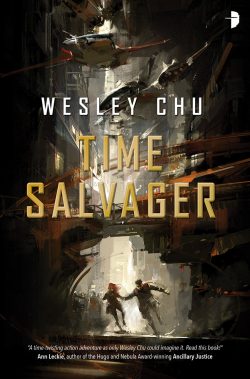 “Time twisting action-adventure as only Wesley Chu could imagine it. I enjoyed it a lot. Read this book!”
– Ann Leckie, Author of the Hugo and Nebula Award-winning Ancillary Justice

In a future when Earth is a toxic, abandoned world and humanity has spread into the outer solar system to survive, the tightly controlled use of time travel holds the key to maintaining a fragile existence among the other planets and their moons. James Griffin-Mars is a chronman – a convicted criminal recruited for his unique psychological makeup to undertake the most dangerous job there is: missions into Earth’s past to recover resources and treasure without altering the timeline. Most chronmen never reach old age, and James is reaching his breaking point.

In a future when Earth is a toxic, abandoned world and humanity has spread into the outer solar system to survive, the tightly controlled use of time travel holds the key to maintaining a fragile existence among the other planets and their moons. James Griffin-Mars is a chronman – a convicted criminal recruited for his unique psychological makeup to undertake the most dangerous job there is: missions into Earth’s past to recover resources and treasure without altering the timeline. Most chronmen never reach old age, and James is reaching his breaking point. On his final mission, James meets scientist Elise Kim, who is fated to die during the destruction of an oceanic rig. Against his training and common sense, James brings her back to the future with him, saving her life, but turning them both into fugitives. Remaining free means losing themselves in the wild and poisonous wastes of Earth, and discovering what hope may yet remain for humanity’s home world.

“When you add up all the elements—great cast, high stakes, well-crafted language, new exfoliations of a classic premise—I think we can say with assurance that Chu is certainly on his way to a vibrant second stage of his career.”
– Paul Di Filippo, for Locus Magazine

“Exciting, interesting, and never forgetting the fun of ideas, this is brilliant new stuff.”
– Paul Cornell, author of London Falling

“From its early pages, Time Salvager establishes itself as an utterly captivating time-travel adventure. To put it simply, Chu’s worldbuilding is extraordinary. There’s a grim believability in his vision of a decaying Earth, and the comm/atmos/exo bands make for vivid, easy-to-imagine tech. Plus, Chu neatly (and humorously) avoids getting bogged down in explanations of the physics of time travel. But even beyond all this, Chu explores the emotional truth of the pain and regret that haunts James as he gives the past — and its people — up for lost.”
– Regina Small of RT Book Reviews

“A powerful and compelling search of the past for redemption in the present, by turns thrilling and sweet and gut-wrenching.”
– Kevin Hearne, New York Times best selling author of Iron Druid

“Chu has taken a simple, brilliant premise and built upon it an epic universe full of thrills and wonder.”
– Jason M. Hough, New York Times bestselling author of The Darwin Elevator

“More than a compelling, innovative take on the perks and pitfalls of time travel – Time Salvager is a sharp study of how human nature might prove mankind’s salvation, or eventually doom us all. This is world-building that will make you fear for the future. In a good way.”
– Cherie Priest, author of Maplecroft

“A clever, cautionary sf tale with cool gadgets, characterization that surprised me in the best possible way, and multiple cunning twists.”
– Kate Elliott, author of the Crown of Stars series

“A fast-paced ride that offers a fresh spin on time travel, combines it with a high-stakes plot and genuinely innovative action, and spices the blend with a healthy dose of irreverent humor.”
– Jacqueline Carey, author of Kushiel’s Dart

“Time Salvager is a high-speed, high-stakes adventure that brings so much promise that it’s been optioned for a film franchise ahead of its release.”
– John DeNardo, Kirkus Reviews

“One of the most fascinating aspects of the book was seeing different slices of future Earth history, and Chu’s take on how technology and society evolve over the coming centuries…There is plenty of action, some nifty ideas, and strong bleak-but-not-quite-dystopic worldbuilding. It’s a book with a lot of desperation, and it sets up an underdog-style against-all-odds fight for survival, both for our protagonist and for our species..”
– Jim C. Hines

“Time Salvager is a fantastic book and one I would highly recommend. the story is fantastic, the characters are really well fleshed out and the dystopian future is so realistic that it’s scary.”
– Two Nerds Talking

“An entertaining novel, I recommend to read it during the summer, with a very good world-building and presentation of the plot. If you allow me the film comparison, I would say it is a blockbuster.”
– Dreams of Elvex

“This is a rocket of a novel. A fast-paced sci-fi thriller. It asks a lot of interesting questions, and whilst some of the answers may be a bit in-your-face, the series has a great deal of potential. If you’re in the mood for something with a unique setting, rapid fire plot, interesting characters, and a solid science-fiction feel, this will definitely be worth a look.”
– Sci-Fi and Fantasy Reviews

“This is one of the most inventive stories I have read this year and it shows in the worldbuilding and explanations. I don’t think I have enjoyed a time travel concept this much since The Time Machine.”
– Fantasy Faction

“When Chu writes something, I will read it. And enjoy it. He works magic with words and makes a tight fast story that I find very hard to put down. Highly recommended, and I can’t wait to see where the story’s future lies.”
– Bibliotropic

“Make sure you don’t miss out on this one guys. Highly entertaining.”
– The Book Plank

“Time Salvager feels like the sort of science fiction I’ve been yearning for. To me, it is on par with greats such as Hyperion and Do Androids Dream of Electric Sheep?. It’s clever, it’s fast, it’s action-packed, but it also carries a message. It is DEFINITELY worth your time.”
– Rinn Reads

“Is Time Salvager good? Yes it is. Am I glad I read it? Yes, I am. Am I going to read the sequel Time Siege? Of course, I am.”
– Elitist Book Reviews

“Time Salvager is a rather ambitious direction for Wesley Chu to take and it’s a gamble that pays off well.”
– The Geeky Guide to Nearly Everything

“While a lot of familiar time travel tropes are present and correct, Chu uses them differently enough to make this book a highly enjoyable read. 8/10.”
– Sci Fi Bulletin

“Time Salvager feels like the next big step in Wesley Chu’s writing career, which continues to rise promisingly. This book does a fantastic job setting up for a fast-paced sci-fi thriller series that is brimming with potential, and you really can’t ask for much more.”
– Bibliosanctum

“Chu created a dystopia. It is dark, but Chu is Chu, so he still laced in humor and characters I grew to love despite their flaws. What isn’t obvious is the book is about relationships, trust, loyalty, and people allowing themselves to feel emotion – any emotion…I will definitely be reading the second book that is planned.”
– Bookish

“Time Salvager simply bursts with energy. Chu’s writing is fun and electric, filled with humor even as he chronicles the slow destruction of Earth and the extinction of mankind.”
– Relentless Reading

“THIS BOOK. What a delightful mesh of sci-fi, thriller, action and of course, time travel.”
– There are Inkspots on my Page

“The prose is easy to read, the ride exhilarating and entertaining, and the story one I certainly want to follow further. Recommended.”
– SFF World

“Time Salvager is the first of what I understand is a brand-new SF series, and with it Wes has clearly upped his own game. His take on time travel is fresh, thought-provoking and makes the story – and indeed the life – of his ‘chronman’ (love that professional title) protagonist, James Griffin-Mars, a nail-bitingly intense but nonetheless thoroughly enjoyable one to read…This is high-octane, sharp-witted stuff of the kind I’ve come to expect from Wesley Chu, and I am completely on board for whatever comes in book two.”
– Over the Effing Rainbow

“I am so glad I chose to listen to the audiobook as Kevin T. Collins gave a great performance. His pacing sort of reminds me of William Shatner’s Kirk as his sentences have distinct pauses and his speech is very articulate. The novel will really get your heart racing and by the end of it, you will feel as though you watched it instead of read/listened to it. Chu did a wonderful job with describing the characters and environments and Collins did a great job bringing the characters to life. I’m very much looking forward to the next book in this series.”
– AudioBook Reviewer (audiobook review)

“This book is brilliant. The concepts are fantastic. Any sci-fi book that deals with time travel faces some tricky maneuvering, but Chu weaves his way around some of the thorny issues quite well, and the whole purpose of the chronmen is simply fantastic. Time Salvager, is the book (series) that will cement his status as a powerhouse in the genre.”
– Looking for a Good Book

“Perfect for people who wish to take the action from the Transformers films with the nuanced approach to world building of Game of Thrones and set it in space.”
– Teen Ink

“A very entertaining, interesting and quite exciting SF novel.”
– Hysterika

“This was one of those delightful books that took me completely out of reality and into a new world.”
– Purple Owl Reviews