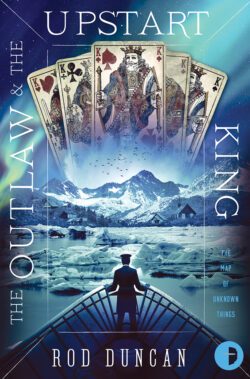 The Outlaw & the Upstart King

“I absolutely loved The Queen of All Crows. It’s a gripping alternative history adventure set in an intriguing world. Among the fast-paced plot twists the novel also provides keen insights into power structures, particularly when it comes to gender roles as social constructs. Elizabeth Barnabus is possibly my favourite steampunk main character ever: resourceful, fearless, unusually observant and emotionally intelligent. I was thrilled to follow her to the ends of the world as a reader.”
– Emmi Itäranta, award-winning author of Memory of Water

Elizabeth Barnabus returns, to uncover the secrets and mysteries of the Gas-Lit Empire, in the startling sequel to The Queen of All Crows.

As it is inked, so shall your oaths and bindings be. Tattoos are the only law on the Island of the Free, and there can never be a king. Every clan agrees on that. But a returning exile has smuggled something across the water that could send the old ways up in flames. Elias wants revenge on the men who severed his oaths and made him an outlaw. But, if his wealth and honour are to be restored, he’ll need help from the most unlikely quarter – a mysterious woman, landed unwontedly on Newfoundland’s rocky shore.

Praise for the Map of Unknown Things

“I’ve read all of the books in the Fall of the Gas-Lit Empire series, and I love how inventive the whole series is. Each book has a strong story and fantastic characters. The Map of Unknown Things series takes us outside the main Gas-Lit Empire to other parts of the world that the author has created. I love that these are great adventure stories, but also have a more thoughtful side to them – the worlds we visit are all very different and flawed in very different ways, but inhabited by people who have been shaped by the nature of those worlds. It’s very clever, but also very engaging – I find myself completely drawn in, unable to predict what will happen next. I also have a strong sense that there is an overall plan to the whole series – this is building into a fantastic overall tale. Really looking forward to the next instalment!”
– Clare Littleford, author of The Quarry

“I absolutely loved The Queen of All Crows. It’s a gripping alternative history adventure set in an intriguing world. Among the fast-paced plot twists the novel also provides keen insights into power structures, particularly when it comes to gender roles as social constructs. Elizabeth Barnabus is possibly my favourite steampunk main character ever: resourceful, fearless, unusually observant and emotionally intelligent. I was thrilled to follow her to the ends of the world as a reader.”
– Emmi Itäranta, award-winning author of Memory of Water

“The Queen of all Crows is a smart and entertaining read, among the best of the steampunk subgenre I’ve read. It continues the story of Elizabeth Barnabus in an alternative history where they take intellectual property protection a little too seriously.”
– Craig Newmark, founder of Craigslist and Craigconnects

“Let’s get this out of the way: The Queen of All Crows is an excellent book, full stop. Duncan has managed to infuse the world of the Gas-Lit Empire, and the character of Elizabeth Barnabus herself, with a new jolt of life, color, and depth. Clear your schedule, because you won’t want to stop reading this until you’ve finished, and then you’ll want more.”
– Eric Scott Fischl, author of The Trials of Solomon Parker

“Some authors really find a groove in their series where each new book is more enjoyable than the last. But Rod Duncan has done even better with The Queen Of All Crows: he’s taken the Gas Lit Empire series into a completely new direction that is both wonderful and wondrous.”
– Surreal Tavi

“It has all the makings of a classic read that will endure for centuries.”
– Adjunct Thoughts

“Rod Duncan shows a great deal of talent as he constructs this world.”
– JD DeHart

Praise for The Fall of the Gas-Lit Empire

“Elizabeth Barnabus is a uniquely intriguing character who will take readers on a fascinating journey through the strange landscapes of the Gas Lit Empire. Rod Duncan’s storytelling skill brings his fictional world to a mysterious, vibrant life.”
– Stephen Booth, bestselling author of the Cooper & Fry series