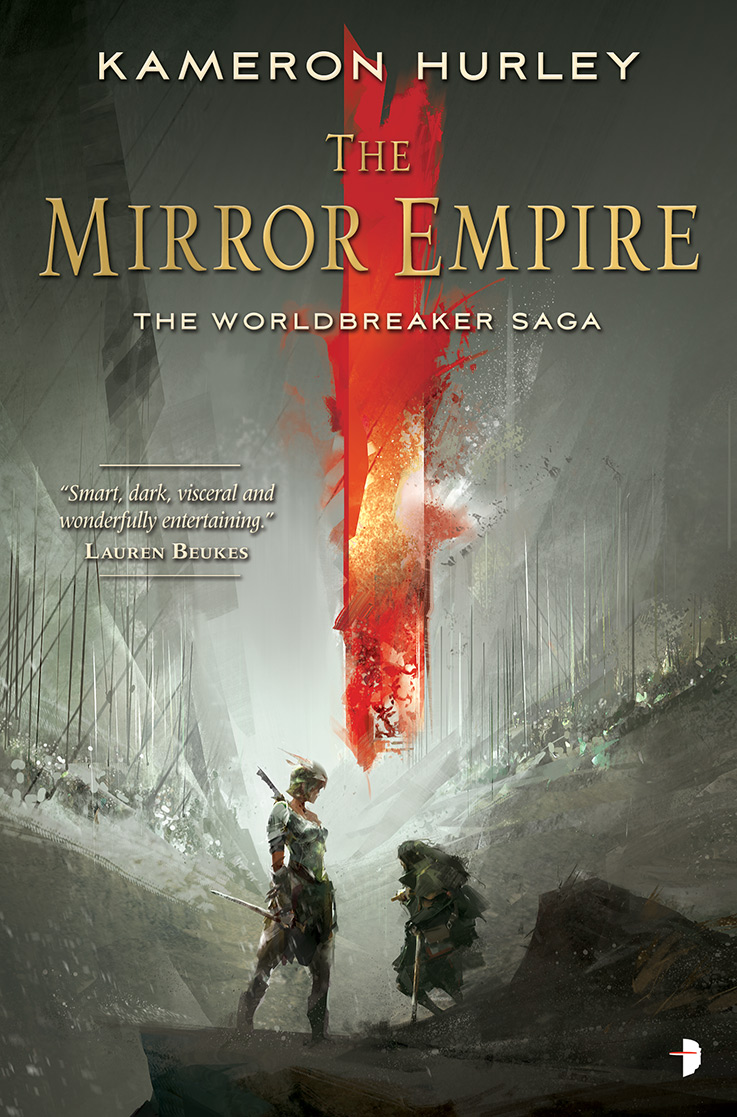 When a shadowy force threatens their world, an orphan blood mage, novice fighter, and illegitimate ruler must unite fractured nations – and confront their own darker natures.

“With vividly inventive world building and a fast-paced plot, The Mirror Empire opens a smart, brutal, and ambitious epic fantasy series. Book two is already on my must-read list.”
– Kate Elliott, author of the Spiritwalker series

The first book in the Worldbreaker Saga series

From the award-winning author of God’s War comes a stunning new series… On the eve of a recurring catastrophic event known to extinguish nations and reshape continents, a troubled orphan evades death and slavery to uncover her own bloody past… while a world goes to war with itself. In the frozen kingdom of Saiduan, invaders from another realm are decimating whole cities, leaving behind nothing but ash and ruin. As the dark star of the cataclysm rises, an illegitimate ruler is tasked with holding together a country fractured by civil war, a precocious young fighter is asked to betray his family and a half-Dhai general must choose between the eradication of her father’s people or loyalty to her alien Empress. Through tense alliances and devastating betrayal, the Dhai and their allies attempt to hold against a seemingly unstoppable force as enemy nations prepare for a coming together of worlds as old as the universe itself. In the end, one world will rise – and many will perish.

“The Mirror Empire is the most original fantasy I’ve read in a long time, set in a world full of new ideas, expanding the horizons of the genre. A complex and intricate book full of elegant ideas and finely-drawn characters.”
– Adrian Tchaikovsky, author of The Shadows of the Apt series and finalist for the 2014 Gemmell Legend Award

“The Mirror Empire is epic in every sense of the word. Hurley has built a world – no, worlds – in which cosmology and magic, history and religion, politics and prejudice all play crucial roles. Prepare yourself for sentient plants, rifts in the fabric of reality, and remarkable powers that wax and wane with the stars themselves. Forget all about tentative, conventional fantasy; there’s so much great material in here that Hurley needs more than one universe in order to fit it all in.”
– Brian Staveley, author of The Emperor’s Blades

“The Mirror Empire is an extraordinary novel. The scale and invention here makes it essential reading but the characters make it remarkable. None of them are heroes and none of them have the comforting sense of having read the book they’re in. They’re all flawed, terrified people doing what they can to survive. Seeing them struggle even as the stakes are raised makes for a reading experience as packed as it is tense. Book 2 can’t get here fast enough.”
– Alasdair Stuart

“Taking epic fantasy down challenging and original paths. Thoughtful and thought-provoking with every twist and turn.”
– Juliet E. McKenna

“Hurley intelligently tackles issues of culture and gender, while also throwing in plenty of bloodthirsty action and well-rounded characters. This is a fresh, exciting fantasy epic that’s looking to the future and asking important questions. 4****/5”
– SFX magazine

‘‘The novel achieves what the most important fantasy strives for: it gives us a world the like of which we have never quite seen before, but that offers us some often unpleasant and provocative shocks of recognition.’’
– Gary K. Wolfe, for Locus magazine

“The Mirror Empire is a fresh, vigorous, and gripping entrant into the epic fantasy genre, able to stand toe-to-toe with any of the heavyweight series out there. I cannot recommend this novel highly enough.”
– SF Revu

“For me [The Mirror Empire] did all the things a fantasy should do – holding our own societies up to the light by reflecting off worlds that are very different. Add in a magic system where the users are only powerful some of the time, and semi sentient vegetation that is possibly more of a threat than the magic users, and I happily sank into this book with a satisfied sigh.”
– Francis Knight, author of Fade to Black

“Bold, merciless, and wildly inventive, Kameron Hurley’s The Mirror Empire begins an epic tale of worlds at war that will linger long in readers’ imaginations. If you’re looking for original and challenging fantasy, this is definitely the series for you.”
– Courtney Schafer, author of The Whitefire Crossing

“There’s a powerful yet elegant brutality in The Mirror Empire that serves notice to traditional epic fantasy: move over, make way, an intoxicating new blend of storytelling has arrived. These are pages that will command your attention.”
– Bradley Beaulieu, author of The Lays of Anuskaya trilogy

“The Mirror Empire takes look at epic fantasy patriarchy & gives it a firm kick in the balls… [it] will be the most important book you read this year.”
– Alex Ristea, Ristea’s Reads

“Hurley has bitten off an awful lot with her ambitious The Mirror Empire. And for those of us who are bored with a linear and predictable narrative, this is a very good thing. Hurley seems determined to supplant nearly every fantasy troupe, even down to her five-gendered social structure with group marriage and funerary cannibalism. These bold rejections of what we take for granted in our own society are illuminating in Hurley’s hands.”
– Sword & Laser

“In the two worlds of The Mirror Empire, we get Deadly Plants, Blood Magic, and yes, Brutal Women. The Mirror Empire is both a chance for fantasy fans to get to know Hurley’s writing, and for previous fans of her work to see what she can do in a new vein. And for readers new to her work, this is in many ways the best place to start. 4.5****/5.”
– Paul Weimer, SF Signal

“One of the most stunning epic fantasies I’ve read this year. The setting is unique and plays a major role in the story. A spectacular novel.”
– Books Without Any Pictures

“With her new epic fantasy series, Hurley has shown that she is no one trick pony. The Mirror Empire is a fresh, vigorous, and gripping entrant into the epic fantasy genre, able to stand toe-to-toe with any of the heavyweight series out there.”
– SF Revu

“There is so much to talk about in The Mirror Empire – whether you stick to the complexities and layers of its unfolding plot, or delve into its ideas about family and sexuality and human intimacy – and it’s Hurley’s staunch insistence on following her own drumbeat that has resulted in such a rewarding reading experience.”
– SFReviews.net

“I can’t even tell you how much I liked this book. It was long, yes, but I didn’t mind it because there was just so much awesome happening. I classify it as a fantasy, but it could also be considered science fiction, what with the parallel universes and binary star system and all.”
– In Case of Survival

“At its best this novel is as good as anything I have read this year. Expect to hear ‘ambitious’ a lot; I couldn’t imagine the mental and physical mapping it would take to hold all these pieces together but hold together they do. The world is alive, the world is unique, and the world is actually built rather than borrowed.”
– Fantasy Review Barn

“The Mirror Empire is an interesting, raw-nerved work of epic fantasy built from the ground up…By the end of this first volume in her new series, the author leaves each of the main characters with a satisfying conclusion while putting to each of them new problems… May the author not keep us waiting too long for the second instalment”.
– Borrowed Worlds

“If I had known how good The Mirror Empire was going to be, I would have waited until after the sale and paid full price as a show of support to the author. As it was, I bought one of her other books to make up for it”.
– 20Four12

“The Mirror Empire is a fast-paced and exciting read, and the start of quite possibly one of the greatest political dramas I have ever picked up.”
– Coffee on My Keyboard

“I loved this book. It’s a wonderful book. Kameron Hurley’s The Mirror Empire is essentially what I wanted Game of Thrones to be: it’s a truly epic fantasy which grapples with fraught ethical questions while immersing me in a meticulously built out world of wonder.”
– Clatter and Clank

“There is plenty of originality here, and a vivid, sweeping quality of culture that cannot go unnoticed and unrecognized. In terms of worldbuilding, it was top notch, and without a trace of the western aligned molds fantasy so often falls so neatly into.”
– The Waking Den

“The world-building is incredibly creative and, sometimes, brutal. I love it.”
– Mental Megalodon

“One of the best epic fantasy novels I’ve read in a long time. It’s the sort of fantasy with the perfect balance of violence and horror that gives you chills and thrills down your spine.”
– Fairy Bookmother

“A saga that fascinates mainly by its striking and original setting. An unstoppable mix of action, mystery, magic and adventures.”
– El Caballero del Árbol Sonriente

“Hurley forcefully flips every genre trope in her sights to create a work simply exploding with a kind of anarchic, creative ferocity. This is not your grandad’s epic fantasy.”
– SFF180