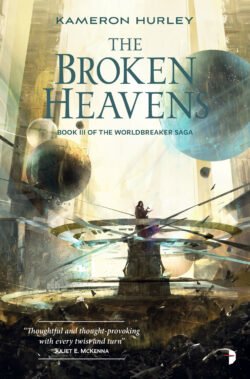 “Epic in every sense of the word. Hurley has built a world – no, worlds – in which cosmology and magic, history and religion, politics and prejudice all play crucial roles. Forget all about tentative, conventional fantasy; there’s so much great material in here that Hurley needs more than one universe in order to fit it all in.”
– Brian Staveley, author of The Emperor’s Blades

The third book in the Worldbreaker Saga

The Tai Mora – invaders from a parallel universe – have vanquished their counterparts and assumed control of the world called Raisa. The Saiduan are wiped out. The Dhai nation has broken apart. The remaining countries are in chaos. While the Dhai retreat and regroup, led by the recklessly headstrong Lilia, the Tai Mora begin to unravel the mystery of how to use the ancient Dhai holy places to harness the power of the stars and cement their tyrannical rule for another two thousand years. With more refugees from ravaged lands passing through the soft seams between worlds every day, time is running out for the Tai Mora and the last of the Dhai. Only one ruler, one nation, one world can survive. Who will be saved, and who will be sacrificed, when the heavens finally break? Back with a vengeance – and fearless, unapologetic writing – Hurley’s visceral masterpiece finally reaches its world-shattering end…

Praise and Reviews for The Worldbreaker Saga

“The Mirror Empire is the most original fantasy I’ve read in a long time, set in a world full of new ideas, expanding the horizons of the genre. A complex and intricate book full of elegant ideas and finely-drawn characters.”
– Adrian Tchaikovsky, author of The Shadows of the Apt series and finalist for the 2014 Gemmell Legend Award

“The Mirror Empire is epic in every sense of the word. Hurley has built a world – no, worlds – in which cosmology and magic, history and religion, politics and prejudice all play crucial roles. Prepare yourself for sentient plants, rifts in the fabric of reality, and remarkable powers that wax and wane with the stars themselves. Forget all about tentative, conventional fantasy; there’s so much great material in here that Hurley needs more than one universe in order to fit it all in.”
– Brian Staveley, author of The Emperor’s Blades

“With vividly inventive world building and a fast-paced plot, The Mirror Empireopens a smart, brutal, and ambitious epic fantasy series. Book two is already on my must-read list.”
– Kate Elliott, author of the Spiritwalker series

“The Mirror Empire is an extraordinary novel. The scale and invention here makes it essential reading but the characters make it remarkable. None of them are heroes and none of them have the comforting sense of having read the book they’re in. They’re all flawed, terrified people doing what they can to survive. Seeing them struggle even as the stakes are raised makes for a reading experience as packed as it is tense. Book 2 can’t get here fast enough.”
– Alasdair Stuart

“Taking epic fantasy down challenging and original paths. Thoughtful and thought-provoking with every twist and turn.”
– Juliet E. McKenna

“Hurley intelligently tackles issues of culture and gender, while also throwing in plenty of bloodthirsty action and well-rounded characters. This is a fresh, exciting fantasy epic that’s looking to the future and asking important questions. 4****/5”
– SFX magazine

‘‘The novel achieves what the most important fantasy strives for: it gives us a world the like of which we have never quite seen before, but that offers us some often unpleasant and provocative shocks of recognition.’’
– Gary K. Wolfe, for Locus magazine

“Hurley has put together something very special. There are complex characters. There’s a believable, if broken world. There’s a plot which will absolutely knock your socks off, if you’re prepared to let it. But it’s also a book willing to explore more deeply, to challenge reader preconceptions and expectations, to ask the reader to invest themselves, and willing to repay that investment in a mixture of enlightenment and blood. That depth, and that narrative bravery, makes Empire Ascendant not just a very good fantasy novel, but a great one – and one very highly recommended.”
– SF and F Reviews

“This series just keeps getting better. It’s one of the most complex sci-fi series I’ve read yet I quickly got back into its worlds. Should you read it? If you love digging deep into worlds and relationships among divergent people, as well as exploring what makes people tick, then I think you’ll really like this series.”
– Popcorn Reads

“If any book deserves to be converted into a black metal saga it is this one.”
– Simon McNeil, author of Trillium

“Recommended for fans of Game of Thrones and The Emperor’s Blades. Intricate, unforgiving, and fascinating.”
– Libromancer’s Apprentice