Skip to content
View cart “The Nemesis Worm” has been added to your cart. 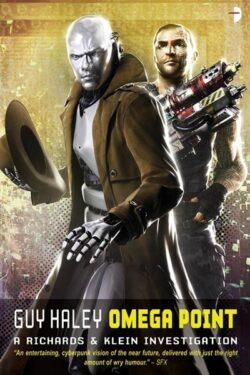 k52 dreams of becoming God. His dreams are about to come true…

The second Richards and Klein investigation, sequel to Reality 36.

The powerful artificial intelligence designated k52 has a plan to take over the world. If it were to create an artificial reality based on our own universe it could theoretically gain enough data to be able to alter reality itself, turning k52 into the ultimate arbiter of mankind’s fate. It’s down to Richards and Klein to stop k52 – even though the alternative could be worse!

Guy Haley is the author of over 40 novels and novellas. His original fiction includes Crash, Champion of Mars, and the Richards and Klein, Dreaming Cities, and the Gates of the World series (as K M McKinley). However, he is best known as a prolific contributor to Games Workshop's Black Library imprint, and has sold over 1.3 million books set in their Warhammer universes.
He lives in Hebden Bridge, with his wife, son and a malamute.
Haley said: “I thank whichever omnipotent deity that’s listening for Angry Robot. The opportunities for new writers are few and far between these days, so hurrah for an imprint that’s not afraid to go hunting out new talent – which includes me. I can’t wait to please my Robot Overlords, though I refuse to do any happy time oiling, that’s not in my contract. It’s just writing. Honest.” Angry Robot Publishing Director Marc Gascoigne added: “We already have a proud tradition at AR of investing in new writers, and in Guy’s case it was a no-brainer. Richards and Klein are brilliant creations, and their adventures wonderfully entertaining. But if Guy thinks he’s going to get off oiling duty, he should check the small print in his contract.”