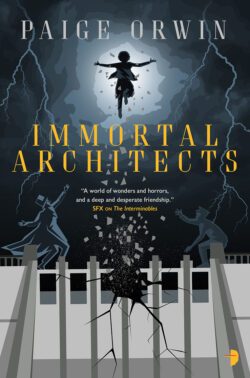 “I can’t state strongly enough that this is superb writing.”
– Online Eccentric Librarian

The struggle to establish a new order in the wake of magical catastrophes is under siege from an old enemy, one who might even turn the heroes against themselves.

Book Two of The Interminables

Edmund Templeton, a time-manipulating sorcerer, and Istvan Czernin, the deathless spirit of WWI, are the most powerful agents of the magical cabal now ruling the US East Coast. Their struggle to establish a new order in the wake of magical catastrophe is under siege: cults flourish and armies clash on their borders. Perhaps worst of all the meteoric rise of a technological fortress-state threatens their efforts to keep the peace. As if that weren’t enough, a desperate call has come in from the west. A superstorm capable of tearing rock from mountains is on its way, and it acting unlike any storm ever seen before. Who better to investigate than two old friends with the sudden need to prove themselves?

“An urban fantasy of epic proportions that still manages to bring life to its characters.”
– Morpheus Tales Reviews

“I can’t state strongly enough that this is superb writing.”
– Online Eccentric Librarian

“I can’t imagine anyone who enjoys epic fantasy worlds not loving this fascinating piece of dystopian fiction.”
– Word Gurgle

“Delightfully, it is just as weird, wonderful and beautiful a story as the first.”
– Blogendorff

“This story has a lot going for it which I’m sure will be an instant hit for fans of Jim Butcher and Cassandra Clare.”
– Splattergeist

“The dynamic between the two main characters is absolutely stunning. And heartbreaking and moving and just…gorgeous… I just love her writing. Absolutely stunning and very realistic.”
– Writer Ravings

Praise for The Interminables

“A wild debut about Time and War teaming up to battle the evils of eternal peace. By the time you’re done you won’t fear the reaper; you’ll want to wrap his lonely, cross-stitch obsessed self up in a hug and never let go.”
– Alis Franklin, author of Liesmith

“Vivid worldbuilding of a fascinating alternate Earth, peppered with touches of whimsy. This is a promising debut!”
– Emmie Mears, author of the Alaya Storm series

“It will reward you with a world of wonders and horrors, alongside a tale of a deep and desperate friendships.”
– SFX: The Sci-Fi and Fantasy Magazine

“The Interminables is the type of book that Angry Robot was made for.”
– Strange Alliances

“It will reward you with a world of wonders and horrors, alongside a tale of deep and desperate friendship: a thief and a war, trying to save as many lives and they can.”
– SFX magazine

“A dark, depressive, but beautifully imagined urban fantasy/alternate universe. Perhaps one of the most interesting, intriguing, and rich books I’ve read this year.”
– Online Eccentric Librarian

“Magic in the modern world is always a fun trope.”
– The Verge, best SFF books to check out in July

“So fucking good.”
– The State of Blogendorff

“The Interminables by Paige Orwin is a unique, sometimes challenging read that really grabbed my attention.”
– Looking For a Good Book

“The Interminables is a type of science fiction/fantasy that I love. It doesn’t dwell too much on the how’s of the situation, but jumps head first to the what’s, who’s, and why’s of the story.”
– The Help Desk