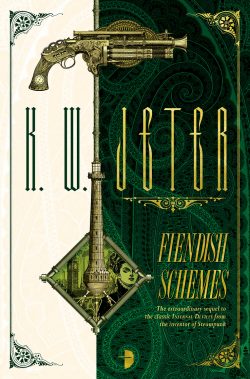 “Jeter’s sequel proves well worth the wait, and sets a new high bar for that ever-evolving style of speculative fiction whose Frankensteinian form he first galvanically jolted into life.”
– Locus

The first British publication of the sequel to Infernal Devices, to mark the 30th anniversary of Steampunk.

In the disorienting steam-fuelled Victorian London, the son of a great inventor finds himself drawn into plots and mysteries he can barely grasp.

File Under: Steampunk [ A Plague of Lighthouses | Sexual Healing | The lady’s Not For Turning | End of the World, Again ]

The second book in the George Dower trilogy

The world George Dower left when he went into hiding was significantly simpler than the new, steam-powered Victorian London. Dower is enticed into a web of intrigue with ominously mysterious players who have nefarious plans of which he can only guess. If he can locate and make his father’s Vox Universalis work as it was intended, his future is assured. But his efforts are confounded by the strange Vicar Stonebrake. Drugged, arrested, and interrogated Dower is trapped in a maelstrom of secrets, corruption, and schemes that threaten to drown him in the chaos of this mad new world.

“Fiendish Schemes is a darkly humored portrayal of Victorian London written in the style of the period and is not for the faint of heart.”
– Historical Novel Society

“A full-bodied rambunctious adventure of preposterous proportions that is full of knowing when it comes to people and weird contraptions.”
– Strange Alliances

“K W Jeter has created quite a marvelous world in Infernal Devices. Sometimes rather weird and alien but always consistent.”
– The Traveler’s Steampunk Blog“

“This is the real thing – a mad inventor, curious coins, murky London alleys and windblown Scottish Isles… A wild and extravagant plot that turns up new mysteries with each succeeding page.”
– James P Blaylock, author of Homunculus and Under London

“At times Jeter can be profound, deep observation swirling into the bizarre.”
– Bearcave

“Jeter is an exhilarating writer who always seems to have another rabbit to pull out of his hat.”
– The New York Times Book Review“