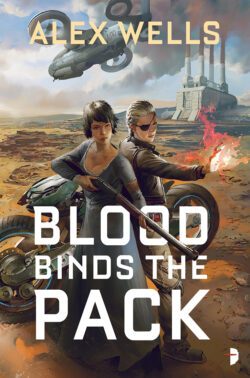 “An absolute riot of a SF/fantasy alt-Western, set on a remote desert world where a greedy technology corporation is coming up against both magic and the power of unionising.”
– K J Charles, author of The Magpie Lord

TransRift corporation are coming down hard on the people of Tanegawa’s World. But the biker gang insurrection led by Hob Ravani with her weird witchy powers won’t give up without a fight.

Join the fight for the people and power of Tanegawa’s world in this thrilling sequel to The Kitschies’ Golden Tentacle Award-winning Hunger Makes the Wolf. War is coming to Hob Ravani’s world. The company that holds it in monopoly, TransRift Inc, has at last found what they’re looking for–the source of the power that enables their Weathermen to rip holes in space and time, allowing the interstellar travel all of human society now takes for granted. And they will mine every last grain of it from Tanegawa’s World no matter the cost. Since Hob Ravani used her witchy powers to pull a massive train job and destroy TransRift Inc’s control on this part of the planet, the Ghost Wolves aren’t just outlaws, they’re the resistance. Mag’s miner collective grows restless as TransRift pushes them ever harder to strip the world of its strange, blue mineral. Now Shige Rollins has returned with a new charge–Mr Yellow, the most advanced model of Weatherman, infused with the recovered mineral samples and made into something stranger, stronger, and deadlier than before. And Mr Yellow is very, very hungry.

“THIS. WAS. MAGNIFICENT. An absolute riot of a SF/fantasy alt-Western, set on a remote desert world where a greedy technology corporation is coming up against both magic and the power of unionising. Also biker witches and female friendships. This book *rocks*.”
– KJ Charles, author of The Magpie Lord

“It is a rare thing, when a second book from an author surpasses the excellence of the first. I did not expect to be so swept away, but Blood Binds the Pack is a tremendous story. Everything you loved about Hunger Makes the Wolf is here – the weird west setting, the charming characters, the fight for lives and loves. But everything in Blood Binds the Pack elevates all that came before.”
– E Catherine Tobler, author of the Folley & Mallory series

“Blood Binds the Pack is a hell of a space western. It ramps to an explosive conclusion—one whose resolution comes a little bit out of nowhere. But on the whole, this is an enormously fun book, and I sincerely hope to see many more books from Alex Wells in the future.”
– Tor.com

“Creative, angry, and joyous in equal parts, I can’t wait to see what Wells serves up next.”
– Binge on Books

“At the risk of sounding like I’m gushing, I properly loved this book!”
– Helen Lindley

“Blood Binds the Pack will take you on a high-octane ride across the sands of Tanegawa’s World with Hob’s misfit band of mercenaries. It’s a lot of fun to read and stands out as something a bit different. Recommended to anyone that likes sci-fi based future fun and action.”
– Helen’s Bookshelf

“This is an action-packed thriller, but it also explores issues of those who seek equality and justice from those who control in an impossible situation.”
– Strange Alliances

“Blood Binds the Pack is a fantastic follow up to Hunger Makes the Wolf.”
– The Illustrated Page

“If you’ve been looking for something like the Colorado Coalfield War IN SPAAACE WITH EXTRA ADDED PSIONICS! then this may be what you want.”
– James Davis Nicoll

“There is a distinctive sensation I get from visiting Tanegawa’s World, the planet where Alex Wells’ Hob Ravani novels are set – like walking against the wind, sand grinding between my teeth. It’s a pitiless, unrelenting tableau of salt and grit and thirst, and, like the best planets, its inhabitants are at the mercy of its disposition. It shapes your body, colonizes your mind.”
– The 1000 Year Plan

“Wildly entertaining. Creative, angry, and joyous in equal parts, I can’t wait to see what Wells serves up next.”
– Binge on Books

“Hunger Makes the Wolf and Blood Binds the Pack form an addictive duology that has become a new favourite.”
– Earl Grey Editing

“This is Dune if Dune were written by a pissed off feminist steeped in socialism, and let me tell you that I am here for that.”
– Amanda J McGee

“My feelings about these books can be summarized as !!!! hearteyes !!!! and with that, I believe that I may have used up my lifetime quota of exclamation marks. Just go read the books.”
– Mad Art Lab

“Wells started strong and ended stronger — can’t ask for more than that… Hunger Makes the Wolf was one of my favorites last year, and this is better. Ultimately, there’s not much more to say than that.”
– The Irresponsible Reader

“Stronger than the first in terms of plot and pacing and characterization – not that book one was bad, by any means, but this one was better and a satisfying conclusion to the story.”
– Almost, Almost

Praise for Hunger Makes the Wolf

“While the backdrop may be arid and dusty, Alex Well’s debut is lush with ideas, characters and invention. A story of chosen families, the different battlefields we choose and that are chosen for us and what it means to be more or less than human, Hunger Makes The Wolf does the near impossible; takes a sub genre that was looking largely played out and uses it as the foundation stone for something new, rich and strange.”
– Winner of The Kitschies’ Golden Tentacle Award for Best Debut 2017

“It has a wonderful weird west vibe and some of the phrasing is simply delicious. Hob is a wonderful character to follow – hers is a solid journey and I got a bit choked up when Hob stood up for what she wanted. Alex crafts a host of fascinating characters here – the Weathermen, the Bone Collector – and I reckon you’re going to love their adventures.”
– E Catherine Tobler, author of the Folley & Mallory Adventures

“Take a dash of Dune, a bit of Fury Road, and a whole lot of badass female characters and you’ve got Hunger Makes the Wolf – a really, really bloody awesome debut from Alex Wells.”
– Emma Maree Urquhart, author of Dragon Tamers

“This thing drips with tension – between characters, within the story itself – that makes it impossible to put down. I needed to know what would happen next, what would Hob do. Tanegawa’s World may be a desolate and uninviting terrain, but it provides fertile ground for the characters,who truly blossom on the page.”
– Shana DuBois for B&N Sci-Fi & Fantasy Blog

“It’s a science fiction Western thriller, and it is great, and I’m really, intensely, eagerly looking forward to the sequel. This is the sort of thing I really like. UP WITH THIS SORT OF THING.”
– Liz Bourke, for Tor.com

“The story is a fast-paced, edge-of-your-seat space opera, tied together with the characters’ struggles, adventures, and mishaps. If you’ve ever thought, “You know what Dune needed more of? More magic and a biker gang!” then this book was written for you.”
– The Canary Review

“I was expecting a fun, quick space adventure read, but this story is so much more than that.”
– Helen Lindley

“This one definitely makes it into my ‘Highly Recommended’ stack. I’d pick this one up for sure if you’re looking for a fun action romp with some unique and amazing female characters.”
– All Booked Up Blog

“I’m always excited when I find a new book that makes me stay up all night reading because I simply can’t put it down. I’m doubly excited when that book is the first in a brand new series. Hunger Makes the Wolf is both those things. Needless to say that I’m absolutely in love.” 5/5*
– Elena Linville’s Tower of Winds

“This is a very cool novel. Hunger Makes the Wolf is a fun, fast, gripping read.”
– The Irresponsible Reader

“Hunger Makes the Wolf is an entrancing addition to any science-fiction lover’s collection. The clever prose alone is enough to grab your attention, but what really makes this novel shine is how immersive it is. The worldbuilding is meticulous, the characters are multifaceted and original, and the present themes are timely and inspiring.”
– RT Book Reviews

“I have to commend Alex Wells, this book was a genuine pleasure. Just goes to prove, irrespective of genre, you can’t go wrong with well-rounded characters and a plot that zips along at a good pace.”
– The Eloquent Page

“Grab any science fiction book and you’ll see they all have the exact same thing in common: the plots and devices of the stories are all predictable and never stray out of bounds. They hardly even push the envelope and, with great joy, I’m glad the author never got that memo. Here’s why: Wells adds magic to the mix. It’s a stroke of genius I’ve been waiting for Peter F Hamilton or Alastair Reynolds to pull off to no avail.”
– The Splattergeist

“It’s a well-conceived, smartly plotted, enthusiastically fast-paced sci-fi adventure with some cool ideas and a couple of excellent lead characters who’ve got plenty growing still to do in future books.”
– SF Bluestocking

“This is one gem of a story you shouldn’t miss out on.”
– Smorgasbord Fantasia

“I will be picking up future volumes.”
– James Nicoll Reviews

“Obvious parallels to Frank Herbert’s Dune will draw readers into this action-packed tale of tyranny and rebellion, but Wells’s character developments take the plot in new directions, leaving the possibility of a sequel.”
– Library Journal

“Hunger Makes the Wolf is a great bit of sci-fi with a dash of fantasy, all cleverly disguised as a brutal, kick-ass western. I want more!”
– Michael Patrick Hicks

“Angry Robot has really upped its game lately; this is one of their best recent releases. Strong debut and I hope for a sequel to start answering a few more of my questions.”
– Fantasy Review Barn

“2017 seemed to be the year of specfic and sci-fi for me, and holy hell, Alex Wells was a crowning glory with Hunger Makes the Wolf. Down-and-dirty space biker witchery with a messy female lead, diverse characters, found families, excellent world building, and unexpected moments of beautifully crafted prose. I’m interested to see if Wells can top Hunger, which as a first novel was pretty dang flawless.”
– The Coil

“Hunger Makes the Wolf was one of my favorites last year, and this is better.”
– Irresponsible Reader

Alex Wells is a writer, geologist, and sharp-dressed sir. They’ve had short stories in Strange Horizons, Lightspeed, Daily Science Fiction, Shimmer, and more. Alex is a host on the popular Skiffy and Fanty podcast, where they talk about movies and other nerdy sci-fi and fantasy things. 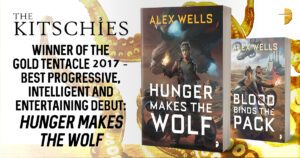