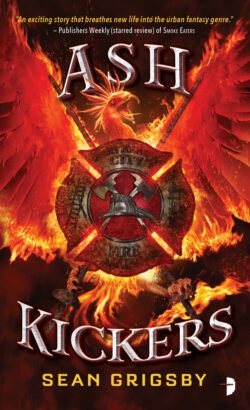 It’s dragons vs firefighters vs the Phoenix in the scorching fantasy sequel to Smoke Eaters.

With ex-firefighter Cole Brannigan in command of the Smoke Eaters, the dragon menace is under control. Thanks to non-lethal Canadian tech, the beasts are tranquilized and locked up, rather than killed. But for Tamerica Williams, this job filled with action and danger, has become tediously routine. When a new threat emerges, a legendary bird of fire – the Phoenix – it’s the perfect task for Williams. But killing the Phoenix just brings it back stronger, spreading fire like a plague and whipping dragons into a frenzy. Will it prove to be too much excitement, even for adrenalin-junkie Williams?

“Grigsby’s pulse-pounding sequel to Smoke Eaters is a worthy successor that expands on the series’ already strong foundation of vivid action and meticulous worldbuilding… vibrantly imagined characters who ring with authenticity, and firefighter Grigsby knows just how to pull readers into scenes full of smoke and flame. Readers will delight in this fresh take on action fantasy.”
– Publishers Weekly

“Starting with its title, Ash Kickers, tells you exactly what type of ride you’re in for then delivers on that promise with a story that hits like a Skyrim meets Ghostbusters battle royale. In it, you can almost feel Grigsby’s glee as he mixes together supersized heroics, mythic creatures, snappy dialogue, and furious fight scenes to form a narrative that reads like a passionate homage to the action blockbusters we all grew up watching.”
– Evan Winter, author of The Rage of Dragons

“The fires burn hotter and the action is more furious on our second visit to this unusual urban fantasy universe.”
– B&N Sci Fi & Fantasy Blog

“This book is instinctively and perceptively created and a joy to read. This has been a genuine pleasure to join Tamerica and her team and I look forward to more.”
– Geek Syndicate

“An ingenious premise that Grigsby delivers on with intelligence and style. Smoke Eaters is a treat!”
– Jason M Hough, New York Times Bestseller

“Rollicking pulp action around a deep, dark heart brimming with barely-contained rage. The book balances brutal deprivation and violence against moments of pride, joy, and sadness. Even pitted at deadly odds against one another, the women of Daughters of Forgotten Light form powerful relationships that shine against their bleak world. The book never apologizes and never pulls a punch, and neither do its characters.”
– Caitlin Starling, author of The Luminous Dead

“High octane and hard hitting. Daughters of Forgotten Light is exactly what I want from sci-fi: badass women getting it done… with unapologetic grindhouse glam.”
– KC Alexander, author of Necrotech and Mass Effect: Andromeda: Nexus Uprising

“Grab your energy boomerang and get ready for a wild ride! Grigsby’s latest book is a full-throttle nightmarish sci-fi Mad Max: Fury Road. It’s violent, intense, and packed with passion as exiled women fight for their very right to exist.”
– Beth Cato, Nebula nominee and author of Breath of Earth

“Grigsby’s world is vividly rendered and full of engaging detail (dragons don’t have wings as in the stories, their victims linger on as ghostly spirits). As a romp, it delivers by the gallon drum.”
– Irish Times

“Read while listening to a thunderous thrash-metal playlist.”
– Financial Times