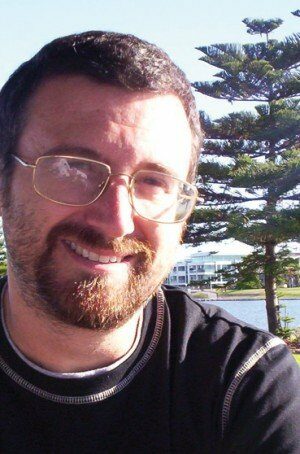 Lee Battersby was born in Nottingham in 1970, departing from a snow-covered city in 1975 directly to a town on the edge of Australia’s largest desert. In November. He’s only just now beginning to recover from the culture shock. He doesn’t like to take credit for it, but there’s nothing to suggest that Angry Robot would have set up shop in town only a mere 30-odd years later had he stayed. Lee is the author of over 70 stories in Australia, the US and Europe, with appearances in markets as “Year’s Best Fantasy & Horror”, “Year’s Best Australian SF & F”, and “Writers of the Future”. A collection of his work, entitled “Through Soft Air” from Prime Books. He’s taught at Clarion South and developed and delivered a six-week “Writing the SF Short Story” course for the Australian Writers Marketplace. His work has been praised for its consistent attention to voice and narrative muscle, and has resulted in a number of awards including the Aurealis, Australia Shadows and Australia Sf ‘Ditmar’ gongs. He lives in Mandurah, Western Australia, with his wife, writer Lyn Battersby and an increasingly weird mob of kids. He is sadly obsessed with Lego, Nottingham Forest football club, dinosaurs and Daleks. He’s been a stand-up comic, tennis coach, cartoonist, poet, and tax officer in previous times, and he currently works as Arts Officer for a local council, where he gets to play with artists all day. All in all, life is pretty good.