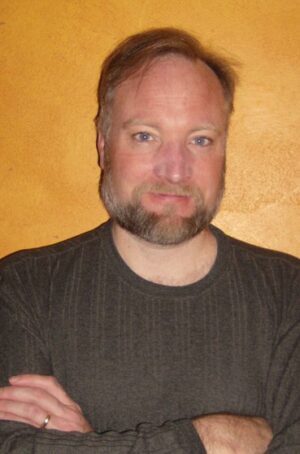 Rob’s debut for Angry Robot, the fabulously scary Angel of Death, does exactly that. The Grim Reaper becomes strangely fascinated with a human cop investigating the deaths caused by a serial killer that the angel has been following. But Death is a killer too, of course, and is not above the law. This will be followed next year by Death’s Disciples. The sole survivor of a terrorist attack on a plane starts to hear the voices of the dead passengers. And what they’re telling her is far worse than what she’s suffered already. King’s recent Sherlock Holmes novel for Tor, The Shadow of Reichenbach Falls, attracted a mass of critical attention, as did his Mad Merlin trilogy for the same publisher. And he can ride a unicycle, though maybe not while typing.