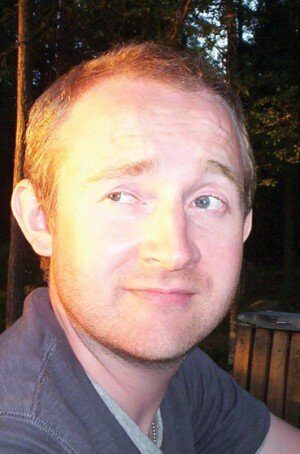 An experienced Science Fiction journalist and critic, Guy worked for SFX Magazine as deputy editor, he edited gaming magazine White Dwarf, and was the editor of Death Ray Magazine. He lives in Somerset with his wife, young son, and an enormous, evil-tempered Norwegian forest cat called, ironically, Buddy.

Haley said: “I thank whichever omnipotent deity that’s listening for Angry Robot. The opportunities for new writers are few and far between these days, so hurrah for an imprint that’s not afraid to go hunting out new talent – which includes me. I can’t wait to please my Robot Overlords, though I refuse to do any happy time oiling, that’s not in my contract. It’s just writing. Honest.” Angry Robot Publishing Director Marc Gascoigne added: “We already have a proud tradition at AR of investing in new writers, and in Guy’s case it was a no-brainer. Richards and Klein are brilliant creations, and their adventures wonderfully entertaining. But if Guy thinks he’s going to get off oiling duty, he should check the small print in his contract.”