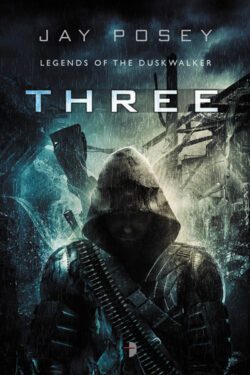 The world has collapsed, and there are no heroes any more. But with lone gunman Three, a hero may yet arise.

“Stark and powerful, Three is a stunning debut. Reinventing the post-apocalyptic western as a journey across interior badlands as dangerous as the cyborg-haunted terrain his hero must cross, Posey has crafted a story that is impossible to put down.”
– Richard E. Dansky, author of Vaporware and Snowbird Gothic

File Under: Science Fiction [ Three For All | Apocalyptic Wasteland | A Journey Home | Fear the Weir ]

The first book in the Legends of the Duskwalker series

The world has collapsed, and there are no heroes any more. His name is Three, a traveling gun for hire in a dying world. He has no allegiances, no family, no ties. Against his better judgment, he accepts the mantle of protector to a sick woman, and her young son. Together they set out across the plains in search of a mythic oasis, attempting to survive the forces that pursue them, and the creatures of the dark. In these dark times, a hero may yet arise.

“Jay Posey creates a vivid and mesmerizing world whose characters are so real and so flawed that you’ll recognize them immediately. An unforgettable read.”
– Peter Telep, Co-author of the #1 New York Times Bestseller, Against All Enemies

“Gritty action-packed drama so hi-res and real you’ll believe you got something in your eye.”
– Matt Forbeck, author of Amortals and Dangerous Games

“Three feels like the result of tossing Mad Max, Neuromancer and Metal Gear Solid into a blender. If you don’t find that combination appealing, then I do not understand you as a human being.”
– Anthony Burch, writer for Borderlands 2 and Hey Ash Whatcha Playin

“Three is a great start into a new series. The post-apocalyptic world that Jay Posey created in Three is brilliantly constructed, it’s just chock-full of the cool stuff, futuristic gadgets (guns and the like), augmented people and not forget the Weir.”
– The Book Plank

“Three is a post-apocalyptic adventure tale in the vein of The Road Warrior, only with fewer vehicles and a higher tech level and body count…Posey knows how to pour on the tension. 4.5 stars. Now I’ll twiddle my thumbs until the next Legends of the Duskwalker book comes out.”
– Shelf Inflicted

“Three will unplug you! This powerhouse of an apocalyptic read cannot and will not be denied!”
– My Shelf Confessions

“I got hooked on Three within the first few pages and could not put down this thrill ride until I finished it in one hell of a marathon read…Three moves like lightning and it kept me spellbound the entire time. At the same time, characters and the world are beautifully developed, if beautiful can be applied to a deadly, desolate post-apocalyptic world where fighting for your life is a daily occurrence. I am literally counting the minutes until Book 2 is published! In case you haven’t guessed, I highly recommend Three!
– Popcorn Reads

“One of the best examples of world building I’ve seen in quite some time, gorgeously written, with a finely paced plot and characters that will break your heart. Once in a while, a book comes along that deserves more than five stars. These special few are awarded my Crystal Chandelier Award of Awesome! Three is only the second book to receive this award…so far!”
– Books, Bones & Buffy

“‘Three is an impressive debut. The plot and setting are different enough to stand out from the post-apocalyptic and dystopian crowd, while still appealing to the same readers. I look forward to reading the more Legends Of The Duskwalker.”
– SF Crow’s Nest

“A fun, action packed read that serves as a solid debut – I’m on board for Book Two for certain.”
– Bane of Kings, The Founding Fields

“Three may be a little light on plot, but I like that it makes up for this with its fast pacing and well-written action sequences, sometimes alternating between the viewpoints of the various characters like you see in movies, creating this atmosphere of danger and suspense.”
– The Bibliosanctum

“Three is a quick read that will keep you reading well into the night. Anyone who loves that mysterious savior blowing into town and protecting the weak should enjoy the book and those who love a good post-apocalyptic thriller should also find a lot to like within its pages. Three is one of those books that slipped between the cracks and really shouldn’t have as it has a lot to offer and tells a great story. The ending leaves fans wondering if there will be another tale featuring Three and I for one hope that there is but only time will truly tell.”
– Speculative Book Review

“Three is awesome and totally unexpected… Posey kept me on my toes throughout the entire story and left me shocked by the end. He has a visceral bite to his storytelling that enveloped me from beginning to end, causing these characters to wander around inside my head during the more mundane moments of my day. This is addictive, adventuresome writing with memorable characters that I want more of as quickly as possible. Three seems like it just scratches the surface of the world and the characters inside the Legends of the Duskwalker series, and I can’t wait to see how Posey develops it in future volumes. This is a really good contender for one of my top 10 books for the year.”
– Working for the Mandroid

“Posey brings a conviction to the story he tells and shines in action packed scenes which help reinforce the cinematic feeling.”
– Literary Escapism

“I found Three very refreshing and I’ve enjoyed the lack of elaborate world-building that takes up half of the book. Posey pushes the story forward with extraordinary ease and I’ve found the experience extremely rewarding. I’ve felt like I was watching an excellent post-apocalyptic action thriller in book form. So while I strongly suspect a lot of people will give up on Three, the others will enjoy it immensely. As far as I’m concerned, I think we need more books like Three so the second book of Legends of the Duskwalker can’t come soon enough.”
– Upcoming4.me

“A book does not easily earn five stars from me. It has to be blow-me-away fantastic, and this book was definitely that. Three by Jay Posey is a sci-fi/dystopian novel that must not be missed.”
– Heather McCorkle

“My exceedingly high expectations for Three, crumbled to the ground as Jay Posey shattered those barriers, only to erect new ones. The sequel, Morningside Fall, has a pair of monstrous shoes to fill. To say I loved this book is a gross understatement.”
– Troubled Scribe

“Jay Posey was able to create a unique post-apocalyptic world full of interesting and dynamic characters, that didn’t seem that way at first. The protagonist, Three was a unique blend of Jason Bourne, Obi Wan Kenobi, Luke Skywalker, MacGyver, Sylvester Stallone, Indiana Jones and James Bond. Quite the mix up! In other words he is very quiet, only speaks when needed, a brutal fighter, a very wise and yet a risk taker, a ladies man, who has a place in his heart for friends and actually cares about people even though he thinks he shouldn’t.”
– Audio Book Reviewer