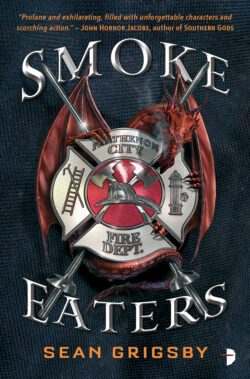 “An ingenious premise that Grigsby delivers on with intelligence and style. Smoke Eaters is a treat!”
— Jason M Hough, New York Times Bestseller

When dragons rise from the earth, firefighters are humanity’s last line of defence, in this wild near-future fantasy.

Firefighter Cole Brannigan is on the verge of retirement after 30 years on the job, and a decade fighting dragons. But during his final fire call, he discovers he’s immune to dragon smoke. It’s such a rare power that he’s immediately conscripted into the elite dragon-fighting force known as the Smoke Eaters. Retirement cancelled, Brannigan is re-assigned as a lowly rookie, chafing under his superiors. So when he discovers a plot to take over the city’s government, he takes matters into his own hands. With hundreds of innocent civilians in the crosshairs, it’s up to Brannigan and his fellow Smoke Eaters to repel the dragon menace.

“An ingenious premise that Grigsby delivers on with intelligence and style. Smoke Eaters is a treat!”
— Jason M Hough, New York Times Bestseller

“Grigsby’s world is vividly rendered and full of engaging detail (dragons don’t have wings as in the stories, their victims linger on as ghostly spirits). As a romp, it delivers by the gallon drum.”
– Irish Times

“Read while listening to a thunderous thrash-metal playlist.”
– Financial Times

“Smoke Eaters is entertaining, speeding through set-pieces without pausing for breath.”
– Sci-Fi Now

“This book had everything I never knew I wanted. It’s action-packed and humorous, yet not afraid to slow down and be reflective every once in a while. Smoke Eaters by Sean Grigsby is a fantasy novel that does practically everything right. 5 stars from me.”
– The Fantasy Inn

“A successful action thriller. By the time you’ve finished Smoke Eaters you’ll be searching the ground and skies for potential hazards, and seeing political conspiracies around every corner.”
– Strange Alliances

“This book has so many elements that I love. You’ve got a cast of characters, with attitude and mild superpowers, who are up against ancient monsters, robots and a corrupt government. Seriously, what’s not to enjoy?”
– Purple Owl Reviews

“It is a freaking awesome premise that should be appealing to everyone with a pulse.”
– High Fever Books

“It’s a pretty entertaining story. Oh, did I mention there are also wraiths? And robots? And some kick-ass battles? … the details Sean Grigsby used in the novel all ring true, thanks to his firsthand experience as a firefighter.”
– czuk it and czukart

“This book absolutely lives up to its hype. Well written, clever, unique and just a damned fine read.”
– Rambles, Writing and Amusing Musings

“Smoke Eaters is going to be one of the best UF reads you find this year.”
– Irresponsible Reader

“If you’re looking for some fun, action-heavy, big-screen ready SFF, or if the premise of firefighters versus dragons appeals to you (and let’s face it, it is a freaking awesome premise that should be appealing to everyone with a pulse), Smoke Eaters is an enjoyable way to go. This is a solid debut, and one that leaves me hoping I’ll get to take another ride-along through Parthenon City with Brannigan and his company of dragon slayers.”
– Michael Patrick Hicks

“If firefighters vs dragons gets your blood pumping then look no further.”
– Alan Brenik

“Smoke Eaters is a crazy AF, edge of your seat thrill-ride that will have you begging for more. Dragons, wraiths, laser weapons, and fire… LOTS OF FIRE. What more could you ask for?”
– FanFiAddict

“Firefighters vs Dragons. If that doesn’t immediately catch your attention or even just make you curious then we can’t be friends.”
– Off the TBR

“This book absolutely lives up to its hype. Well written, clever, unique and just a damned fine read.”
– Solo the First

“Old-school fun that doesn’t take itself too seriously… It’s also a fast read, unapologetically honing along like a fire truck with all lights and sirens blazing.”
– Grimdark Magazine

“A blazing debut, well worth your time.”
– Jacey Bedford’s Journal

“It’s a good story; with great, developed characters; a wonderful concept; all executed like a seasoned pro was behind it all… Smoke Eaters is going to be one of the best urban fantasy reads you find this year.”
– Irresponsible Reader

“For fans of classic science fiction this book will be like reading an old favourite. It is much like reading Heinlein, Harrison, Robinson, and Herbert. It is a fun read and I give it two enthusiastic thumbs up!”
– Book Reviews and More

“It’s sheer fun. Imagine Pacific Rim the movie – but with dragons and firefighters instead.”
– Surreal Tavi

“I know it’s only March but this has to be a contender for Book of the Year. An excellent debut by an author I will certainly be keeping an eye on.”
– Ebookwyrm’s Blog Cave

“Truly a scorching hot debut packed with pulse-pounding action and a hero, you can’t but love … this absolute fire-blast of a book is a shot in the arm for urban fantasy genre.”
– Smorgasbord Fantasia