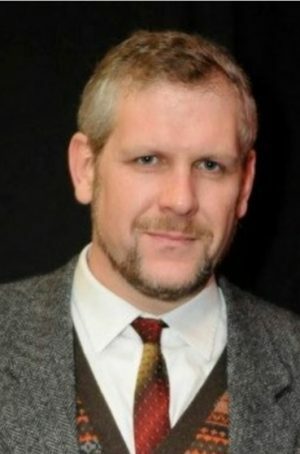 Matthew De Abaitua’s novel The Red Men was shortlisted for the Arthur C Clarke Award and adapted into a short film ‘Dr Easy’ by Shynola and produced by Film4/Warp Films. His science fiction novels IF THEN (Angry Robot, September 2015) and The Destructives (Angry Robot, 2016) complete the loose trilogy begun with The Red Men.
His book Self & I: A Memoir of Literary Ambition (Eye Books, 2018) was widely reviewed in the national press, chosen as a Financial Times Summer Read and described by The Times Literary Supplement as “a compelling reminiscence”. He teaches creative writing and science fiction at the University of Essex and lives in Hackney.

Blog Posts
The Big Idea for Scalzi’s Whatever blog (November 17)
Storytelling and Chance Lessons from Magic: The Gathering for Tor.com (March 16)
Music To Write Science Fiction By for Fantasy Faction (March 16)
What Was Your Perspiration For Writing This Novel? for The Speculative Herald (February 16)
Penning A Loose Trilogy for Sci-Fi Bulletin (January 16)
Facebook and the First World War for Civilian Reader (September 15)
Using Real Places in Science Fiction for Sci-Fi Bulletin (September 15)
A Sense of Place for SFF World (August 15)
A Letter To My Teenage Self for Dear Teen Me (August 15)