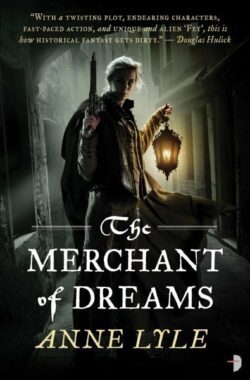 The Merchant of Dreams

“Whether you like action, magic, romance or mystery there is something for you here. I never had a reason to put the book down. I am very eager to read the third book in the series.”
– Mazarkis Williams, author of the Tower & Knife series

The continuing adventures of Mal Catlyn and company, as the swashbuckling swordsman sets sail for a showdown with destiny in the city of Venice.

The Second Book in the Night’s Masque Series

Exiled from the court of Queen Elizabeth for accusing a powerful nobleman of treason, swordsman-turned-spy Mal Catlyn has been living in France with his young valet Coby Hendricks for the past year. But Mal harbours a darker secret: he and his twin brother share a soul that once belonged to a skrayling, one of the mystical creatures from the New World. When Mal’s dream about a skrayling shipwreck in the Mediterranean proves reality, it sets him on a path to the beautiful, treacherous city of Venice – and a conflict of loyalties that will place him and his friends in greater danger than ever.

“I loved everything about The Merchant of Dreams: it is exciting, thrilling and Lyle’s gorgeous prose drives the story elegantly forwards towards a goal … A fantastic example of historical fantasy going all the way and holding nothing back, The Merchant of Dreams is complex and exciting.”
– Leo Elijah Cristea

“The exploration of gender, relationships (both political and personal) and sacrifice continue in a historical fantasy that is as light-hearted and entertaining as it is deep. Perhaps its most admirable quality is Lyle’s willingness to explore and represent the minority in a realistic and unashamed manner.”
– Elloise Hopkins

“This may be one of the best historical fiction/fantasy novels of 2012. Venice, Pirates, Skraylings, politics and some epic action scenes in sixteenth century Europe make sure that The Merchant of Dreams is a worthy successor to The Alchemist of Souls.”
– Bane of Kings, The Founding Fields

“Where Lyle excels is with the amount of accurate historical detail she peppers the book with. She’s careful about using period expressions and terminology, making the book feel authentic.
– Jessica Strider, Sci-Fi Fan Letter

“The Merchant of Dreams is a fantastic sequel to The Alchemist of Souls … Lyle is a master of blending historical fact and fantastic fiction and she’s only gotten better with her second book.”
– Mieneke van der Salm, A Fantastical Librarian

“Full of vitality and some spectacular sequences, The Merchant of Dreams is simply fantastic.”
– Shadowhawk, The Founding Fields

“beautifully written … The Merchant of Dreams will most likely enthrall any reader who loves history.”
– Tammy Sparks Books, Bones & Buffy

“One of the things I enjoyed most in this novel was its complexity. Just when you think you know who the bad guy is, it turns out to be someone else. There’s very little good and evil, but almost everyone is wearing a mask of one sort or another and there’s much fun to be had figuring out what’s behind all of them.”
– Ros Jackson, Warpcore SF

“It’s a heady world of politics, intrigue, and xenophobia, and Lyle makes creating a vivid and grimy Elizabethan background look easy … I love any book that can combine my loves of both historical and fantasy fiction.”
– Aoife, Footnotes

“If you’ve read the first book, this escalates the world and mythology. If you are new to this world, you can read this independently, but if were you, I would buy both books. They are simply brilliant, and I can’t wait for the next installment.”
– Theresa Derwin, Terror-Tree