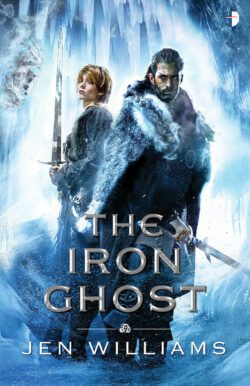 “Williams has thrown out the rulebook and injected a fun tone into epic fantasy without lightening or watering down the excitement and adventure. Indeed, The Iron Ghost has its fairly brutal moments, like the best epic fantasy, but is shot through with a very contemporary sensibility. Highly recommended.”
– The Independent

Wydrin, Sebastian, and Lord Frith set of what was supposed to be just another job. A simple fetch quest quickly turns into much more than they’d bargained for.

File Under: Fantasy [ Dawning of a New Mage | Ice and Fire | The Sacred Mountain | Frozen Mission ]

The second book in the Copper Cat series

Beware the dawning of a new mage… Wydrin of Crosshaven, Sir Sebastian and Lord Aaron Frith are experienced in the perils of stirring up the old gods. They are also familiar with defeating them, and the heroes of Baneswatch are now enjoying the perks of suddenly being very much in demand for their services. When a job comes up in the distant city of Skaldshollow, it looks like easy coin – retrieve a stolen item, admire the views, get paid. But in a place twisted and haunted by ancient magic, with the most infamous mage of them all, Joah Demonsworn, making a reappearance, our heroes soon find themselves threatened by enemies on all sides, old and new. And in the frozen mountains, the stones are walking…

“A highly inventive, vibrant high fantasy with a cast you can care about; fast-moving enough to ensure there is never a dull moment, but with sufficient depth to feel the outcome matters…”
– British Fantasy Society

“The highly anticipated sequel to the entertaining The Copper Promise, which featured appealing leads with a tendency to put self-interest ahead of heroism.”
– The Guardian

“The Iron Ghost is a fun, fast-paced read.”
– Astounding Yarns

“The Copper Cat series has so far proved, with two books to date, to be both entertaining and memorable. It’s a fresh set of stories and characters in a genre that sees so much of the same done over and over again; its inventiveness and diversity is impressive and distinctive.”
– Ageless Pages

“I loved this novel. It’s a very smooth read, and I found myself turning the pages late into the night, unable to sleep without seeing what happened next.”
– Barnes & Noble Sci-Fi & Fantasy Blog

“Williams’s storytelling abilities are on full display here as is her great ability with character development and character interactions.”
– SFF World

“Jen Williams is a force to be reckoned with. This modern fantasy is epic in scale but never loses the focus on her beloved characters. Pick it up for the fantasy but stay for the frankly incredible writing. Williams stands up on her own against some of the powerhouses like Sanderson and Jordan.”
– San Franciso Book Review

Jen Williams lives in London with her partner and their cat. She started writing about pirates and dragons as a young girl and has never stopped. Her short stories have featured in numerous anthologies and she was nominated for Best Newcomer in the 2015 British Fantasy Awards.